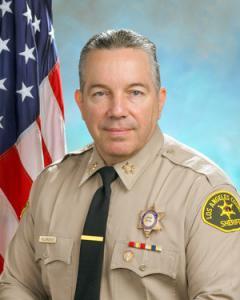 (Image by Los Angeles Sheriff's Department)   Details   DMCA
tps://www.nbclosangeles.com/news/local/los-angeles-county-sheriff-reporter-arrest-deputy-shooting/2428282/">We have people fanning the flames of hatred and just turning up the volume when we don't need it. We need to be turning it down"
- LA Sheriff Alex Villanueva

The police are entrusted with broad powers which give them the authority they need to enforce the law. If just a small percentage of these officers abuse their power they risk setting off a chain reaction within the public that will cause some to question if that trust is well placed. George Floyd's murder on Memorial Day was such an event.

As protests spread throughout the country to demand accountability, the police were put in the precarious position of having to enforce the law as crowds directed their anger directly at them. To add to their stress, they had to do so under a microscope where every mistake was subject to capture by the ever-present cell phone camera. Even under these conditions, the public has the right to expect that they would maintain their professionalism at all times.

Last Friday night, deputies from the Los Angeles Sheriff's Department clearly failed to meet these expectations. Granted, the conditions that these officers were operating under were extreme. Two of their own had just been shot at execution-style and were brought to the hospital in critical condition. To rub salt in the wound, a group of five protesters was taunting them without any trace of civility, including expressing the wish that "I hope they f------ die." According to a video recorded of the incident by KPCC reporter Josie Huang, the five were on the sidewalk outside the hospital. They were faced by an equal number of sheriff's deputies, one of whom was pointing a weapon at them.

Tweets sent from the LA County Sheriffs' account tells an entirely different story. According to this account, the protesters were "blocking the entrance & exit of the HOSPITAL EMERGENCY ROOM" making it so "ambulances can't get through." Though no illegal activity is apparent in the video, deputies "issued a dispersal order for the unlawful assembly". One man was arrested for not complying with their order.

The Sheriff's department went on to say that "during his arrest, a struggle ensued at which time a female adult ran towards the deputies, ignored repeated commands to stay back as they struggled with the male and interfered with the arrest. The female adult, who was later identified as a member of the press, did not identify herself as press and later admitted she did not have proper press credentials on her person. Video of the arrest shows the same reporter who took the video being forced to the ground by at least five deputies. Huang can also be clearly heard telling them "I am with KPCC."

Video shot on Huang's cell phone clearly shows that the other suspect was already in custody at the time that they tell her to "back up" and that she was not interfering with their actions. A total of two seconds passes between the time they gave her that direction and she can be heard saying "ow." After taking the reporter into custody, two of the deputies are caught on video deliberately trying to destroy her phone and the evidence it contains.

Sheriff Alex Villanueva was elected based on his promise to clean up the department but has failed miserably at the task. This summer, his deputies were caught on video holding three crime victims at gunpoint before finally figuring out that they were not the perpetrators. Other deputies shot an 18-year-old security guard five times in the back. Another man was killed by deputies after they say that he lunged for a gun that was laying on the ground. Kobe Bryant's widow filed suit against the department after deputies took pictures of the helicopter crash site and "Villanueva ordered [them] to quietly delete the photos" before the investigation was concluded. All of this occurred against a backdrop of renewed allegations that gangs of deputies wield a lot of power within the department. On top of this, the sheriff has also refused to comply with a subpoena requiring his testimony before the Sheriff Civilian Oversight Commission. 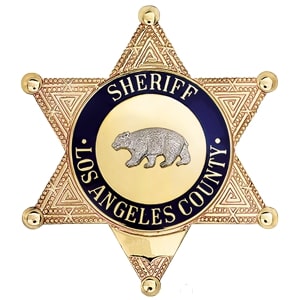 (Image by Los Angeles Sheriff's Department)   Details   DMCA
Instead of acknowledging the concerns that the community has over these events, Villanueva has dismissed them all out of hand. The sheriff states "that there is no gang of any deputies running any station" but admits that there is an ongoing investigation. He also rejects claims that the criminal justice system is biassed against people of color, calling such accusations a "false narrative". While calling on his detractors to stop "fanning the flames of hatred", the Sheriff politicized the shooting of his deputies by tying it to the protests against his department. These accusations are made despite the fact that "the gunman hasn't been captured and a motive has not been determined."

Villanueva also defended the arrest of Huang by repeating accusations that are contradicted by the video, including the falsehood that she did not identify herself as a reporter. He added: "All I can say is, in the heat of the moment when these protesters are calling or chanting for the death of the deputies in the emergency room, she picked the worst time possible to try to get an up-close of the deputies making an arrest. That's on her." This seems to be an admission that his deputies were letting their emotions control their actions.

The fact that Villanueva would attack "elected officials, sports figures, and civic leaders" for expressing their legitimate concerns shows that he is not worthy of the trust placed in his hands. That he does so while ignoring possible criminal activity by his deputies, including the destruction of evidence, should attract the attention of the state's Attorney General.
________________________________
Carl Petersen is a parent, an advocate for students with special education needs, an elected member of the Northridge East Neighborhood Council, a member of the LAUSD's CAC, and was a Green Party candidate in LAUSD's District 2 School Board race. During the campaign, the Network for Public Education (NPE) Action endorsed him, and Dr. Diane Ravitch called him a "strong supporter of public schools." For links to his blogs, please visit www.ChangeTheLAUSD.com. Opinions are his own.

Related Topic(s): Defund The Police, Add Tags
Add to My Group(s)
Go To Commenting
The views expressed herein are the sole responsibility of the author and do not necessarily reflect those of this website or its editors.