"The stakes are too high to allow the president to install an unconfirmed lackey to lead the Department of Justice." 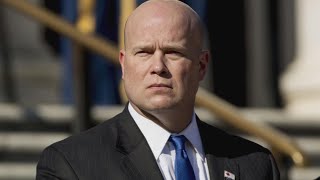 Denouncing President Donald Trump's appointment of acting attorney general Matthew Whitaker -- a fervent critic of the Russia probe -- as a blatant effort to "subvert the Constitution to protect himself and evade accountability," three Democratic senators on Monday filed suit against the White House and demanded that Whitaker be barred from temporarily serving as the nation's top law enforcement official.

"The stakes are too high to allow the president to install an unconfirmed lackey to lead the Department of Justice -- a lackey whose stated purpose, apparently, is undermining a major investigation into the president," declared Sen. Sheldon Whitehouse (D-R.I.), who joined fellow Democratic Sens. Mazie Hirono (Hawaii) and Richard Blumenthal (Conn.) in filing the lawsuit.

"We want the court to make clear that the Senate must confirm Matthew Whitaker's appointment as acting attorney general -- otherwise this temporary appointment violates the Constitution's Appointments Clause," Hirono added in a statement.

commondreams.org is a progressive publisher
Related Topic(s): Accountability; Constitution In Crisis; Democratic; Matthew Whitaker; Trump Appointee, Add Tags
Add to My Group(s)
Go To Commenting
The views expressed herein are the sole responsibility of the author and do not necessarily reflect those of this website or its editors.