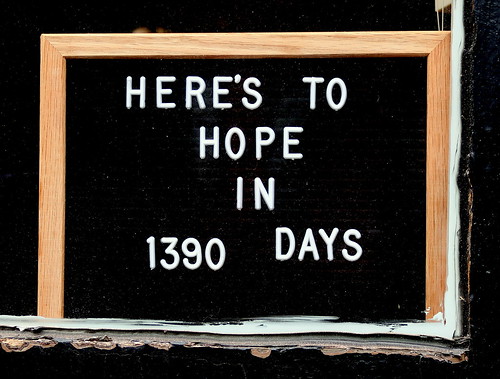 The countdown has begun: Inauguration Day in the USA, 20 January 2017
(Image by Hunky Punk)   Details   DMCA

As Donald Trump is sworn in as the 45th president of the United States, observers around the world continue to wonder -- and worry -- about what direction US foreign policy will take under his administration.

There is plenty of reason to be concerned. From the campaign to the present day, Trump has fired off a series of inflammatory and often contradictory statements on his vision for America's role on the global stage. He has praised Britain's exit from the EU, questioned the US' commitment to NATO, and has cozied up to strongmen like Vladimir Putin despite evidence of Russian meddling in the US presidential election. Showing no hesitation to flout longstanding US policy, he and his entourage have made a series of particularly incendiary remarks about Beijing. Last week, for instance, Trump's nominee for secretary of state, Rex Tillerson, said during his confirmation hearing that Washington had to "send China a clear signal that, first, the island-building stops, and second, your access to those islands also is not going to be allowed." The only way to stop the island building, however, would be through a naval blockade, which runs the risk of setting off a full-blown war with Beijing -- so much for Trump being an "isolationist" President.

Hillary Clinton would certainly have been preferable to a president who looks practically ready to set off a war over a Tweet. But we have to admit that her foreign policy record and platform also left much to be desired. Clinton has a long-standing reputation as an interventionist and foreign policy hawk. Going against many of her Democratic colleagues, she voted for the US intervention in Iraq, a decision now recognized as a disastrous mistake. She foolishly pushed for a military intervention in Libya that has left behind nothing but a failed state and would have deployed boots on the ground in Syria had it not been for Obama's opposition. And she has a history of cozying up to unsavory regimes -- going so far as to accept donations to her foundation from autocratic Gulf States like Qatar, even while she was Secretary of State.

Even if Clinton's foreign policy platform was far superior to Trump's cacophonous rants, nominating one of the most hawkish candidates in the Democratic Party's history was arguably one of the many mistakes that helped put the Donald into the White House.

To stand up to the foreign policy disaster that the Trump presidency will represent, and to avoid repeating the utter failure that was the last round of elections, Democrats must abandon the faulty tactics used by the Clinton camp and revamp their platform. This means a strong, progressive, principled foreign policy platform more along the lines of Bernie Sanders'. Yes, some critics -- including Democrats -- slammed Sanders for lacking sufficient foreign affairs experience, or even a clear platform. However, Sanders laid out a clear vision for America's role in his world during his campaign, one that is in line with the strong philosophy laid out by three Democratic members of the Senate Armed Services Committee in 2015.

A future Democratic platform must therefore entail, first and foremost, uncompromising support for a defined set of values, including freedom, democracy, and human rights, both at home and abroad. This would involve increased funding for foreign aid, particularly in support of human rights, democracy building, and gender equality initiatives. In addition to foreign assistance, Democrats should commit to equally strong nation-building efforts at home.

Veering away from a hypocritical foreign policy, in which Washington says one thing and does another, the party should pledge to support only those regimes that live up to certain standards. In parallel with these steps, Democrats should commit to diplomacy as a first resort over military tactics. This means promising to strengthen our network of embassies and to provide solid support for multilateral organizations like the UN and NATO.

However, the Democrats should not extend carte blanche support to these institutions if it also means compromising higher principles.

For instance, take the Senate's approval of a resolution supporting Montenegro's membership in NATO on January 11. While many senators might have voted in favor of further expansion of the alliance in part to combat Russian influence, they should have thought twice before blithely giving the go-ahead to a state with a history of corruption and human rights abuses.

Perhaps they missed the headlines this past October, when Montenegro's parliamentary and local election votes were marred by accusations of abuse and an alleged coup attempt by Serbian agents. The subsequent resignation of Prime Minister Milo Djukanovic, who has governed almost constantly as premier or president since 1991, is not expected to bring much change. Throughout his time in office, Djukanovic has been accused of using his position to enrich himself while most of his countrymen go poor. For instance, Italian prosecutors claim that he was involved in an extensive cigarette smuggling network in the 1990s. It's no wonder that the Organized Crime and Corruption Reporting Project named Djukanovic "Man of the Year" in 2015. Though Djukanovic has deflected attention from his shady past in part by trumpeting his country's efforts to join NATO and the EU, he should be known more for his role in building one of the biggest organized crime hubs in the world.

Instead of rubber-stamping the membership applications of such states, Democrats must take advantage of these opportunities to demand higher standards. Having a clear set of principles and standing up for them will be the only way to face off against the ethical sludge of the Trump administration. After all, let's remember how critics slammed Bernie Sanders for his strategy of emphasizing principles over experience during the Democratic presidential candidate debates. The candidate with more experience, but with a more dubious set of principles, ended up losing the general election. The next time elections come around, the Democrats -- and the world -- won't be able to afford another failure.