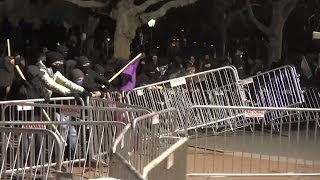 Cancellation Riots broke out during a demonstration at UC Berkeley over the planned appearance by controversial political commentator Milo Yiannopoulos.
(Image by YouTube, Channel: Inside Edition)   Details   DMCA

As you may know, on Wednesday night, February 1, Berkeley gave Yiannopoulos a major forum to spout his racist and misogynistic vitriol. But police had to cancel the talk because about 150 masked agitators threw Molotov cocktails, smashed windows where Yiannopoulos was scheduled to speak, and threw rocks and fireworks at the police -- delivering made-for-TV images of a riot.

According to a promotional Breitbart story that ran before the event, Yiannopoulos was going to "call for the withdrawal of federal grants and the prosecution of university officials who endanger their students with their policies."

Which is exactly what Trump did via tweet early the next morning: "If U.C. Berkeley does not allow free speech and practices violence on innocent people with a different point of view -- NO FEDERAL FUNDS?"

Thursday night, Yiannopoulos had a friendly interview on Fox News's "Tucker Carlson Tonight" -- a show that, according to the Washington Post, has ridden anger at left-wing activism into best-in-class prime time ratings.

Yiannopoulos wasn't asked about the content of the speech that was shut down. The conversation focused instead on how Berkeley proved the point that the Left was ceding its right to federal grants by cracking down on free speech.

Which raises the possibility that Yiannopoulos and Brietbart were in cahoots with the agitators, in order to lay the groundwork for a Trump crackdown on universities and their federal funding.

(2) Before Yiannopoulos speaks at Berkeley, Breitbart publishes an article saying that Yiannopoulos will call for the withdrawal of federal grants and the prosecution of university officials who endanger their students with their policies.

(3) Berkeley opens its doors to Yiannopoulos, but campus police have to cancel the event because of masked agitators.

(4) Hours later, Trump issues a misleading tweet, accusing the university of not allowing free speech and promoting violence against innocent people with different views, and threatening to withhold federal funds.

(5) The next night, Yiannopoulos on Fox News says the incident proves that universities like Berkeley don't deserve federal grants by cracking down on free speech.

Related Topic(s): Berkeley Protest; Brietbart; Speech; Students; Tweet; Violence, Add Tags
Add to My Group(s)
Go To Commenting
The views expressed herein are the sole responsibility of the author and do not necessarily reflect those of this website or its editors.