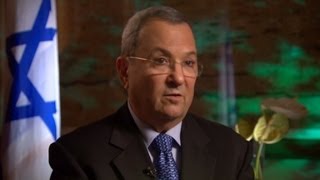 IN THE late 1980s, my secretary told me that the Deputy Chief of Staff wanted to see me.

That was rather surprising. The army command was not on friendly terms with my paper, Haolam Hazeh. For dozens of years we had been officially boycotted by the army, after publishing a story which the then Chief of Staff considered insulting.

So I was curious when I entered the Deputy's room. His name was Ehud Barak, and I had never met him before.

Our conversation turned quickly toward European military history. I was quite surprised. In general, Israeli military chiefs are technicians, not theoreticians. But, since military history happens to be a hobby of mine, I was glad to discover that Barak was quite an expert on the subject.

Thus, conversing happily about the 30-years war, I was waiting for him to bring up the matter for which he had invited me. But the time passed and no other matter emerged. There was no other matter.

EHUD BARAK was an unlikely soldier. Once his brother told me how Ehud became a commando soldier: he was short and fat as a boy, so his brother had to pull strings very hard to get him accepted by the elite unit.

The results were phenomenal. Barak was a daring commando soldier. He received several citations for personal bravery, commanded audacious exploits in enemy territory, advanced quickly in rank and in the end had filled almost every senior command post, including chief of intelligence, until he became Chief of Staff (the Commander in Chief of the armed forces).

After that it was natural in Israel for him to go into politics. In 1999, after joining the Labor Party and becoming its chief, he won the national elections against Binyamin Netanyahu.

Oh, joy! When the results were announced on the radio, there was a tremendous spontaneous outburst. Masses of people, overcome with emotion, converged on Tel Aviv's central square, the place where Yitzhak Rabin had been murdered four years earlier. I was there when Barak announced from the tribune: "This is the dawn of a new day!"

The joy was justified. Years before, Barak had told Gideon Levy that if he had been a young Palestinian, he would have joined a terrorist organization. Here was a new spirit.

But something went wrong. President Bill Clinton called for a peace conference at the Camp David resort. There the three of them -- Clinton, Arafat and Barak -- were to give birth to an historic peace agreement.

It did not happen. Instead of seeking the company of Arafat and airing the problems in private, Barak remained isolated in his cabin. When seated at dinner between Arafat and the young daughter of the President, Barak devoted himself exclusively to her.

True, at Camp David Barak offered peace terms which went further than those of earlier Prime Ministers, but they still fell far short of the minimum the Palestinians could accept. The conference broke up without results.

A real statesman would have declared something like this: "We had a fruitful discussion. It would have been a miracle if, after a hundred years of conflict, we had reached an agreement at the first attempt. There will be more conferences, until we reach agreement."

Related Topic(s): Ehud Barak; Israel; Likud; Palestinian; Peace, Add Tags
Add to My Group(s)
Go To Commenting
The views expressed herein are the sole responsibility of the author and do not necessarily reflect those of this website or its editors.