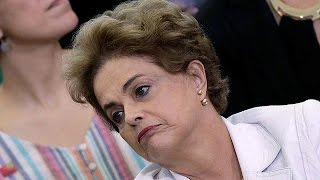 On one level, the impeachment of Brazilian President Dilma Rousseff seems like vintage commedia dell'arte: the Lower House speaker who brought the charges, Eduardo Cunha, had to step down because he has $16 million stashed in secret Swiss and U.S. bank accounts. The man who replaced Cunha, Waldir Maranhao, is implicated in corruption around the huge state-owned oil company, Petroblas. The former vice-president and now president, Michel Temer, has been convicted of election fraud, and has also been caught up in the Petroblas investigation. And the president of the Senate, Renan Calheiros, has also been implicated in the oil company scandal and is dodging tax evasion charges. In fact, over half the legislature is currently under investigation for corruption of some kind.

But there is nothing comedic about what the fall of Rousseff and her Workers Party will mean for the 35 million Brazilians who have been lifted out of poverty over the past decade, and for the 40 million newly minted members of the middle class one-fifth of Brazil's 200 million people.

While it was the current downturn in the world's seventh largest economy that helped light the impeachment fuse, the crisis is rooted in the nature of Brazil's elites, its deeply flawed political institutions, and the not so dead hand of its 1964-1985 military dictatorship.

Given that the charges against Rousseff do not involve personal corruption, or even constitute a crime -- if juggling books before an election were illegal, virtually every politician on the planet would end up in the docket -- it is hard to see the impeachment as anything other than a political coup. Even the conservative Economist, long a critic of Rousseff, writes "in the absence of proof of criminality, impeachment is unwarranted" and "looks like a pretext for ousting an unpopular president."

That suspicion is reinforced by the actions of the new President. Temer represents the center-right Brazilian Social Democratic Party (PSDB) that until recently was in alliance with Rousseff's Workers Party. As soon as Rousseff was impeached by the Senate and suspended from office for 180 days, Temer made a sharp turn to the right on the economy, appointing a cabinet of ministers straight out of Brazils' dark years of dictatorship: all white, all male, and with the key portfolios in the hands of Brazil's historic elites. This is in a country where just short of 51 percent of Brazilians describe themselves as black or mixed.

Seven of those ministers have been implicated in the Petroblas scandal.

The President announced a program to "reform" labor laws and pensions, code words for anti-union legislation and pension cuts. His new Finance Minister, Henrique Meirelles, a former central bank head who once headed BankBoston in the U.S., announced that, while programs for the poor "which don't cost the budget that much" would be maintained -- like the highly popular and successful Bolsa Familia that raised tens of millions out of poverty through small cash grants -- other Worker Party initiatives would go under the knife.

The new government is already pushing legislation that would roll back laws protecting the environment and indigenous people, and has appointed ministers with terrible track records in both areas.

Conn M. Hallinan is a columnist for Foreign Policy In Focus, "A Think Tank Without Walls, and an independent journalist. He holds a PhD in Anthropology from the University of California, Berkeley. He oversaw the (more...)
Related Topic(s): Brazilian President Dilma Rousseff; Corruption; Coup, Add Tags
Add to My Group(s)
Go To Commenting
The views expressed herein are the sole responsibility of the author and do not necessarily reflect those of this website or its editors.