On this Independence Day 2020, we stand as a nation somber and reflective after months of semi-isolation for many as a deadly virus punishes us for mere acts of humanity.

As we look out, we see division after the death of George Floyd sparked a nation to scream "enough" and confront a history too long ignored; and after 1,262 days of a presidency that has never sought to represent all Americans and which will use this great holiday as a platform to stoke further division.

We also see a nation frightened, with the continued spread of the coronavirus claiming lives and devastating our economy, while our President has waived the flag of surrender (as the world watches in horror), preferring instead to protect confederate monuments rather than American lives. 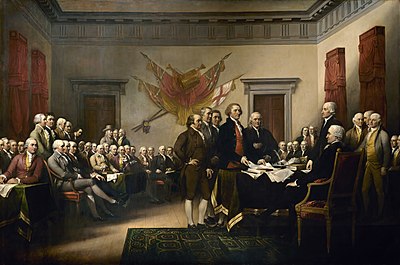 In the past, this day has been a celebration of America the mighty, but maybe today it is better that we remember the origins of this holiday. On this day, fifty-six men boldly signed a unanimous declaration of independence against the greatest economic and military power in the world to pursue a republic that had yet to succeed in the modern world.

We must remember that the success of the revolution and our political system was far from preordained. In fact, four generations later President Lincoln stood on the battlefield at Gettysburg amidst a bloody civil war testing whether "any nation so conceived . . . can long endure" and called on those present to resolve to ensure that "government of the people, by the people, for the people, shall not perish from the earth."

Sadly, although our nation has flourished and democracy has advanced across the globe, at home our Republic is once again imperiled - not by a hostile power or rebels but by an elected President and Congressional Republicans refusing to demand accountability for a corrupt and autocratic president. Former National Security Advisor John Bolton is just the latest former Trump advisor to join the chorus of those who warn that President Trump is a threat to our Republic and fear what he might do to retain power or should he get reelected. Unleashing National Guardsmen with bayonets on peaceful protestors who stood in the way of his staged photo-op gave us a sneak preview of what may lay ahead.

Today, however, we celebrate the boldness and courage of our forefathers to take on a superpower to pursue a government based on the principle that "all men are created equal, that they are endowed by their Creator with certain unalienable rights, that among these are life, liberty and the pursuit of happiness." We have not always lived up to that pledge, not even our founders who enshrined the institution of slavery, counted African-Americans as three-fifths of a man and left a territory without representation subject to the same taxation without representation which they rebelled against.

Yet despite the dark clouds that hover over us, empowered by that boldness, I rise with a sense of hope. As the clouds of smoke and teargas receded from the streets of Minneapolis and elsewhere, they were replaced with a dawning awareness by Americans that we have not fulfilled this pledge when we tolerate systemic racism. For polling numbers show that every Karen and Ken is matched by scores of Americans at all levels coming to terms with its past - a past that includes slavery, Jim Crow, Tulsa, redlining, and more.

I am hopeful because I believe in the American spirit. Like Lincoln, I believe that these last few months will lead to a "new birth of freedom". I believe that as the nation addresses systematic racism, not just in our police force, but throughout society, we can begin to wash the stain of our nation's original sin.

I am hopeful that with last week's historic House vote to grant statehood to the District of Columbia, we have taken the first steps towards ending the last vestiges of colonialism in America. With a new Congress next January, this may become reality, but we also must address the rights of Puerto Rico and other territories.

Last night, President Trump held a rally at Mt. Rushmore that exposed another area where we have failed to live up to the promise of our Founders, for the rally was held on land that the U.S. Supreme Court has held was wrongfully taken from the Lakota people in violation of our treaty obligations and their rights under the Constitution's Takings Clause. This comes at a time when Native Americans are suffering disproportionately from the coronavirus; due in part to centuries of neglect such that today at least thirty percent of the Navajo Nation lack access to running water and to ongoing neglect as they have struggled to get necessary PPEs and tests. Let the legacy of that speech be not the rantings of a small man but the dedication of a great nation to right a wrong and fulfill its promise.

Mindful of Lincoln's call for us to rededicate ourselves, I am hopeful that the American people increasingly are turning away from President Trump's hateful rhetoric and that we may soon begin the task of repairing the damage his presidency has done to our standing in the world.

That is what I celebrate today. Let freedom ring.