Why have Edward Snowden's actions resonated so powerfully for so many people? 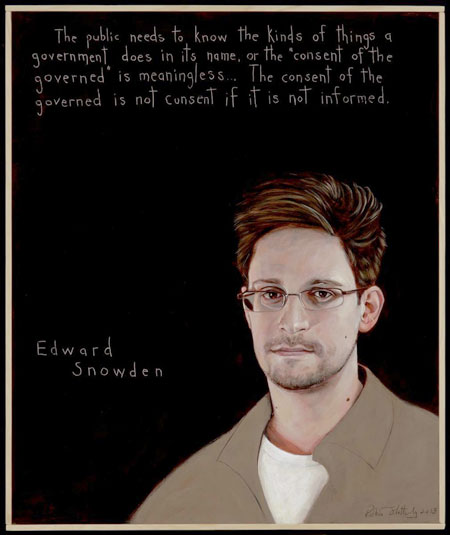 The huge political impacts of the leaked NSA documents account for just part of the explanation. Snowden's choice was ultimately personal. He decided to take big risks on behalf of big truths; he showed how easy and hazardous such a step can be. He blew the whistle not only on the NSA's Big Brother surveillance but also on the fear, constantly in our midst, that routinely induces conformity.

Like Bradley Manning and other whistleblowers before him, Snowden has massively undermined the standard rationales for obedience to illegitimate authority. Few of us may be in a position to have such enormous impacts by opting for courage over fear and truth over secrecy -- but we know that we could be doing more, taking more risks for good reasons -- if only we were willing, if only fear of reprisals and other consequences didn't clear the way for the bandwagon of the military-industrial-surveillance state.

Near the end of Franz Kafka's The Trial, the man in a parable spends many years sitting outside an open door till, near death, after becoming too weak to possibly enter, he's told by the doorkeeper: "Nobody else could have got in this way, as this entrance was meant only for you. Now I'll go and close it."

That's what Martin Luther King Jr. was driving at when he said, in his first high-risk speech denouncing the Vietnam War: "In this unfolding conundrum of life and history, there is such a thing as being too late. Procrastination is still the thief of time. Life often leaves us standing bare, naked, and dejected with a lost opportunity."

Edward Snowden was not too late. He refused to allow opportunity to be lost. He walked through the entrance meant only for him.

When people say "I am Bradley Manning," or "I am Edward Snowden," it can be more than an expression of solidarity. It can also be a statement of aspiration -- to take ideals for democracy more seriously and to act on them with more courage.

The artist Robert Shetterly has combined his compelling new portrait of Edward Snowden with words from Snowden that are at the heart of what's at stake: "The public needs to know the kinds of things a government does in its name, or the "consent of the governed' is meaningless. . . The consent of the governed is not consent if it is not informed." Like the painting of Snowden, the quote conveys a deep mix of idealism, vulnerability and determination.

Edward Snowden has taken idealism seriously enough to risk the rest of his life, a choice that is to his eternal credit and to the world's vast benefit. His decision to resist any and all cynicism is gripping and unsettling. It tells us, personally and politically, to raise our standards, lift our eyes and go higher into our better possibilities.

Related Topic(s): Democracy; Edward Snowden; NSA; Surveillance; Whistleblowers-ing, Add Tags
Add to My Group(s)
Go To Commenting
The views expressed herein are the sole responsibility of the author and do not necessarily reflect those of this website or its editors.