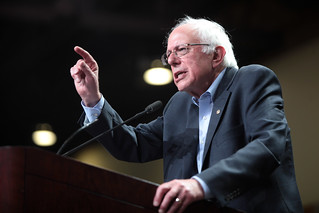 For as long as I can remember the term "Socialism" has been demonized as something very, very bad. People somehow relate it to Germany or the USSR from the 30's, 40's or 50's and how could we be like Stalin or Mussolini?

Socialism simply means that the government collects taxes and uses that money to provide services to the people. These are much-needed services that cannot be delivered via the private, profit-seeking model, including police, fire fighters, teachers (public schools) national defense, and infrastructure (roads and bridges), etc. They also include Social Security, Medicare, Medicaid, the VA, and a myriad of domestic programs which help people at all rungs of the economic ladder. You can't advertise these services on television and expect people to buy them online or at the big brick-and-mortar stores. There's also a fundamental concept that rich people could afford to buy their way into these products and services, where poor people cannot, therefore it's incumbent upon us to help make them widely available. Otherwise, only the rich would benefit, and the poor could never take advantage.

Most other industries are run under the private, capitalism model. Theoretically, these industries have fair competition which sparks research and creativity to develop the best-in-class product or service and they thrive based on their sales/revenues. For most of these industries, we all pretty-much agree; there's no controversy. The contention arises when we take a step back and think about some industries which are now operating under the model of Capitalism (i.e. FOR-PROFIT) and maybe SHOULD be operating under the Socialism model. So, let's take a look at some of those....

Even after the changes resulting from the Affordable Care Act, and even though the right-wing continues to parrot talking points about "Obamacare" being a government takeover of health care, the reality is that our health care system today (post "Obamacare") is STILL based on the PRIVATE health insurance model. "Obamacare" essentially added a bunch more rules to attempt to cover a larger base and reign in the insurance provider's abuses. It's debatable whether "Obamacare" actually controlled costs, and then of course there's a litany of right-wing claims, most of which are without merit or evidence.

The bottom line, however, is that as long as the private health insurance model persists, our system is such that some people are profiting off of other people's sickness. In my humble opinion, that is downright immoral. In addition it drives an incentive to actually make more people sick (cha-ching). Moreover, with profit (i.e. greed) built into the system, along with marketing, promotion, administration and all of the other expenses associated with running a business, there's no way the costs are going to be reduced.

So Bernie Sanders is absolutely right - the only way to deliver health care to EVERYONE and bring costs down, is to implement a "Single-Payer" (i.e. "Medicare-for-All") health care delivery system, much like EVERY OTHER INDUSTRIALIZED NATION. To characterize this goal as "unrealistic" is to have a defeatist attitude - "Hey, the Republicans won't go for it, so we might as well not even try". Really? Is that how we should lay out our agenda? Shoot for incremental change because we think real change is unattainable? And who's to say that "incremental" change is even attainable? Republicans are always talking about "repealing and replacing Obamacare" - well, just maybe, 'Medicare-For-All' IS the best replacement?

If you haven't seen Michael Moore's new film - "Where To Invade Next?" - make it your business to see this documentary as soon as you can. It's a game-changer. One thing I learned is that in (I think it was) Slovenia, where the educational system is considered best-in-class, private schools are against the law. Since the children of the rich people are attending the same schools as the children of the poor people, all of the schools are considered equal and high-quality. It's in the rich people's interest to make sure all of the schools are up to par. Hence all children, rich or poor, receive the same high-quality education and it doesn't matter which school they attend.

Both Democratic candidates see the necessity to open the doors wider for people to attend higher education, which is more and more prohibitive these days due to the rising costs. And if higher education is too expensive for poor people, then only rich people can take advantage and poor people continue to be disadvantaged with little or no opportunity to rise into affluence.

So, when you hear Republicans talk about private schools, "charter" schools, or voucher programs, that's really code for "I'm rich and I want MY kids to get a better education then those poor kids so they have more and better opportunities..."

Underneath The "Surge" Strategy

An Open Letter To Our Troops

Dick Cheney: The Pure Evil Behind The President

Food For Thought: What If Gore Had Won

A Perspective - What is "Democratic Socialism"?

Did The Holocaust Really Happen?