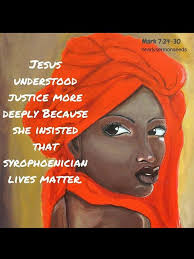 Today's readings return us to the idea explored here a few weeks ago - Big God faith vs. small god beliefs. Today's selections point to the latter as the root of diabolically deep divides like those separating Jews from Palestinians - as well as the rest of us from those we despise as somehow "foreign."

This time however, the vehicle for making the Big God point is mildly sarcastic humor. And it comes from a completely unexpected source - a presumably uneducated Palestinian woman schooling a specifically Jewish prophet about his small god beliefs. It's the only place in the early Christian tradition where Jesus is out bantered and rendered speechless in what can only be described as a contest of repartee. The joke is that the Great Teacher loses!

The woman in question is a Palestinian mom seeking a cure for here mentally disturbed daughter whom the reigning culture considered demon possessed. Within the story's context, the demon in question seems to be a product of the dominant Jewish culture's belief in a small nationalistic god who favors Jews over Palestinians. No wonder the child was disturbed; she had been told since birth that she was worthless. That, of course is the same demon that today not merely causes Palestinian children (and a whole list of others in our world) mental anxiety; too often, it costs them and/or their parents and siblings their very lives.

The woman is remembered by Matthew as "Syrophonician." That meant she was not a Jew. She was a native or inhabitant of Phoenicia when it was part of the Roman province of Syria. She was living near the twin cities of Tyre and Sidon -- a gentile or non-Jewish region of the Fertile Crescent where Matthew takes trouble to locate today's episode. As I said, that would have made Jesus' petitioner what we call a "Palestinian" today.

(By the way, Matthew's geographical note serves to remind us that the Jews never controlled all of their "Promised Land." Instead, they always had to share it with "Palestinians" including Canaanites, Hittites, Amorites, Perizzites, Hivites, Jebusites, Geshurites, Maacaathites, and Philistines.)

In any case, the woman's daughter is troubled apparently by this culturally imposed anxiety.

So, identifying Jesus as specifically Jewish, the woman petitions: "Have pity on me, Lord, Son of David! My daughter is tormented by a demon."

Jesus responds by ignoring his petitioner at first and then by disrespectfully associating his petitioner with dogs -- almost calling her a b*tch. Disdainfully, he says, "I have been sent for the lost children of Israel . . . it is not right to take the food of the children and throw it to the dogs."

The reply seems out of character for Jesus, doesn't it? In fact, such dissonance has led many to reject the saying as inauthentic. (On the contrary, I would say that the negative light in which this tale presents Jesus argues for its authenticity. After all, the evangelists were anxious to present him as favorably as possible. Why would they make up a story like this?) Whatever the case, Jesus' reply only echoes the rabbinic saying of the time, "He who eats with idolaters is like one who eats with a dog."

In other words, Jesus' comparison stands in a long line of small godders likening cultural outsiders to animals. If Matthew's account is accurate, in his initial silence and then in his harsh response, Jesus was showing himself to be captive to his people's traditional norms.

However, the brave woman in today's gospel doesn't take no for an answer. She drolly replies, "Please, Lord, for even the dogs eat the scraps that fall from the table of their masters."

The witty answer evidently astonishes Jesus. We can almost hear him laughing as he shakes his head and exclaims, "O woman, great is your faith! Let it be done for you as you wish." In other words, the woman "converts" Jesus; he concedes her argument. The one the gospels present as the master of verbal riposte is vanquished by this simple Palestinian mom.

Related Topic(s): Faith; God; Humor; Jesus; Mothers; Nationalism; Palestinians And Israel Multi-national Peace Talks; Religion; Sunday, Add Tags
Add to My Group(s)
Go To Commenting
The views expressed herein are the sole responsibility of the author and do not necessarily reflect those of this website or its editors.