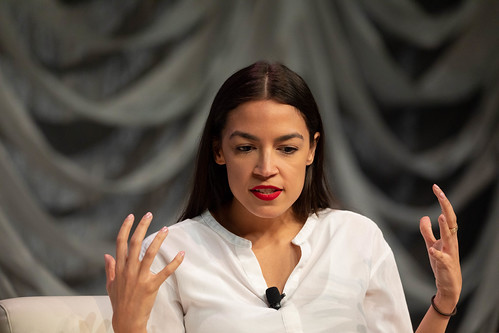 The Intercept launches "A Message From the Future With Alexandria Ocasio-Cortez," a seven-minute film narrated by the congresswoman and illustrated by Molly Crabapple. Set a couple of decades from now, it's a flat-out rejection of the idea that a dystopian future is a forgone conclusion. Instead, it offers a thought experiment: What if we decided not to drive off the climate cliff? What if we chose to radically change course and save both our habitat and ourselves?

What if we actually pulled off a Green New Deal? What would the future look like then?

This is a project unlike any we have done before, crossing boundaries between fact, fiction, and visual art, co-directed by Kim Boekbinder and Jim Batt and co-written by Ocasio-Cortez and Avi Lewis. To reclaim a phrase from House Speaker Nancy Pelosi, it's our "green dream," inspired by the explosion of utopian art produced during the original New Deal.

And it's a collaboration with a context and a history that seems worth sharing.

Back in December, I started talking to Crabapple the brilliant illustrator, writer, and filmmaker about how we could involve more artists in the Green New Deal vision. Most art forms are pretty low carbon, after all, and cultural production played an absolutely central role during Franklin D. Roosevelt's New Deal in the 1930s.

We thought it was time to galvanize artists into that kind of social mission again but not in a couple of years, if politicians and activists manage to translate what is still only a rough plan into law. No, we wanted to see Green New Deal art right away to help win the battle for hearts and minds that will determined whether it has a fighting chance in the first place.

Crabapple, along with Boekbinder and Batt, have been honing a filmmaking style that has proved enormously successful at spreading bold ideas fast, most virally in their video with Jay Z on the "epic fail" of the war on drugs. "I would love to make a video on the Green New Deal with AOC," Crabapple said, which seemed to me like a dream team.

Related Topic(s): Alexandria Ocasio-cortez; Climate; Future; Green New Deal; Painting; Video, Add Tags
Add to My Group(s)
Go To Commenting
The views expressed herein are the sole responsibility of the author and do not necessarily reflect those of this website or its editors.