Cross-posted from The Guardian
The aftermath of the storm offers a chance to rebuild a fairer society. How can we seize it? 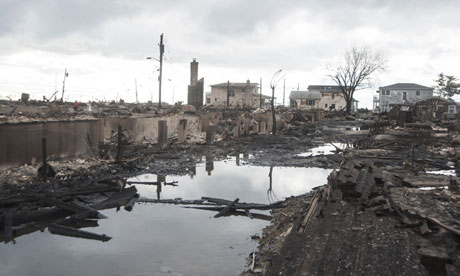 Less than three days after Sandy made landfall on the east coast of the United States, Iain Murray of the Competitive Enterprise Institute blamed New Yorkers' resistance to Big Box stores for the misery they were about to endure. Writing on Forbes.com, he explained that the city's refusal to embrace Walmart will likely make the recovery much harder: "Mom-and-pop stores simply can't do what big stores can in these circumstances," he wrote. He also warned that if the pace of reconstruction turned out to be sluggish (as it so often is) then "pro-union rules such as the Davis-Bacon Act" would be to blame, a reference to the statute that requires workers on public works projects to be paid not the minimum wage, but the prevailing wage in the region.

The same day, Frank Rapoport, a lawyer representing several billion-dollar construction and real estate contractors, jumped in to suggest that many of those public works projects shouldn't be public at all. Instead, cash-strapped governments should turn to public private partnerships, known as "P3s" in the US. That means roads, bridges and tunnels being rebuilt by private companies, which, for instance, could install tolls and keep the profits. These deals aren't legal in New York or New Jersey, but Rapoport believes that can change. "There were some bridges that were washed out in New Jersey that need structural replacement, and it's going to be very expensive," he told the Nation. "And so the government may well not have the money to build it the right way. And that's when you turn to a P3."

Related Topic(s): American Capitalism; Climate; Disaster Capitalism; Disaster Preparedness; Hurricane Sandy, Add Tags
Add to My Group(s)
Go To Commenting
The views expressed herein are the sole responsibility of the author and do not necessarily reflect those of this website or its editors.