For men, combat experience is the leading cause of PTSD. For women, it's sexual assault. This is the real "war on women" 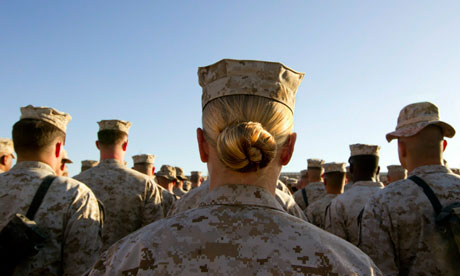 A new documentary by director Kirby Dick, The Invisible War, about systemic rape of women in the military and the retaliations and coverups victims face, has won awards in many film festivals, and recently even triggered congressional response. The examples of what happens to women soldiers who are raped in the military are stunning, both in the violence that these often young women face, and in the viciousness they encounter after attacks.

In December 2005, for instance, Kori Cioca was serving in the US Coast Guard, and was raped by a commanding officer. In the assault, her jaw was broken. When she sought to move forward with her case, her own commanding officer told her that if she pursued the issue, she would face court martial for lying; her assailant, who admitted to the assault while denying that rape was part of it, was "punished" by being restricted to the base for 30 days and docked some pay.

Cioca now has PTSD, along with nerve damage to her face. She is fighting the Veterans Administration (VA) to receive approval for surgery she urgently needs; she has also become a plaintiff in a class action civil suit against the Department of Defense.

''He didn't rape me because I was pretty or because he wanted to have sex with me; he raped me because he hated me," she asserts.

The numbers around the level of sex assault in the military are staggering. There is so much of this going on in the US military that women soldiers' advocacy groups have created a new term for it: military sexual trauma or MST. Last year, there were 3,158 cases of sexual assault reported within the military. The Service Women's Action Network notes that rape is always under-reported, and that a military context offers additional hurdles to rape victims: the Department of Defense, they point out, estimates that these numbers are misleading because fewer than 14% of survivors report an assault. The DoD estimates that in 2010 alone, over 19,000 sexual assaults occurred in the military.

"Prosecution rates for sexual predators are astoundingly low," they note. In 2011, "officials received 3,192 sexual assault reports. But only 1,518 of those reports led to referrals for possible disciplinary action, and only 191 military members were convicted at courts martial."

The Department of Defense, they further record, does not keep any kind of military sex offender registry that could potentially alert soldiers and commanders, let alone law enforcement, to the presence of military sexual predators. When women soldiers report their rapes, this group points out, they often feel revictimized by the process.

So, our women veterans are more likely to be traumatized by a sex assault by a fellow soldier, or a commander, than by their own battlefield or war experiences.

That rape, sexual assault, sexual harassment and their attendant consequences are often risk factors for PTSD isn't the only outcome for women veterans of sex crime -- it runs even to higher rates of homelessness:

The authors note than a high minority of these soldiers traumatized by MST are, in fact, male, which raises many other troubling issues.

MST costs us tax dollars, too: last year, "the VA spent almost $900m on sexual assault-related healthcare expenditures." I have heard from women veterans of Iraq and Afghanistan, in particular, that one serious problem they had -- which led to health difficulties -- was that female soldiers had high rates of illness from dehydration: they were reluctant to drink, even in 110-degree heat, because so many rapes took place in the portable outhouses.

Many of these stories involved a culture of male soldiers attacking women in the desert by ganging up at an outhouse with other men, or by assaulting a woman when she had stepped into the field to relieve herself. The fact that so many women veterans independently described these dangers suggests how systemic, and also how necessarily well-known to commanders, such risks must have become.

Author, social critic, and political activist Naomi Wolf raises awareness of the pervasive inequities that exist in society and politics. She encourages people to take charge of their lives, voice their concerns and enact change. Wolf's landmark (more...)
Related Topic(s): Military Active-Duty; Military Rape; Military Women; PTSD; Soldiers, Add Tags
Add to My Group(s)
Go To Commenting
The views expressed herein are the sole responsibility of the author and do not necessarily reflect those of this website or its editors.