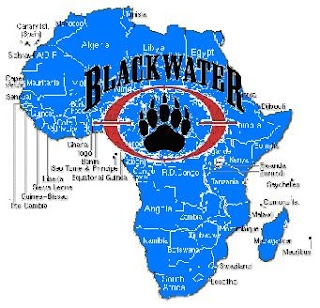 Blackwater's "Indiana Jones" May Soldier For

When I was a kid, my father tried to translate the family name - Vojir - to me (from Czech): "It means a kind of paid soldier. A Hessian. A soldier of fortune." Ah, "soldier of fortune" was great way to put it, I thought. I didn't press any further. I was satisfied. Glamorous. Mysterious. Sophisticated. It was only when I was in college that I realized that the meaning was closely related to the term "mercenary." Somehow, "mercenary" isn't as glamorous.

So I sit here a "mercenary," writing about Erik Prince, today's undisputed king of mercenaries. Of Blackwater infamy. A man whose "soldiers" are feared more in Iraq and Afghanistan than any U.S. military force. A man with extremely close ties to Family Research Council and Focus on the Family. OK, I'll stop channeling Rachel Maddow, but you get my drift.

And the makings for a conspiracy just might be in this bit of news:

Sources close to Blackwater and its secretive owner Erik Prince claim that the embattled head of the world's most infamous mercenary firm is planning to move to the United Arab Emirates (UAE). The Middle Eastern nation, a major hub for the US war industry, has no extradition treaty with the United States. In April, five of Prince's top deputies were hit with a fifteen-count indictment by a federal grand jury on conspiracy, weapons and obstruction of justice charges. Among those indicted were Prince's longtime number-two man, former Blackwater president Gary Jackson, former vice presidents William Matthews and Ana Bundy and Prince's former legal counsel Andrew Howell.

Prince's move is like a Midwest tornado watch: the conditions are ripe for something to happen. Could it be a conscious conspiracy or just a re-grouping?

Most of the media have translated the move as a protection against prosecution for crimes, including the alleged murder of an informant inside Blackwater. This could very well be. But is it the only reason? Let's look at Erik's closest relations, friends and allies:

For starters, Erik Prince's father, Edgar Prince, used a great deal of his auto parts fortune to fund both Focus on the Family and The Family Research Council.

Elsa Prince Broekhuizen - Erik's mother - gave a whopping $450,000 to California's Prop 8 campaign. After the death of Edgar Prince, she married her pastor, Ren Broehuizen. She was also a member of the secretive Council on National Policy.* The CNP was founded by author Tim LaHaye (the Left Behind series). Elsa Prince is also a major contributor and board member of The Family Research Council. Of course, because of major contributions, the FRC runs its mass printing facility out of Holland, MI. (Prince's home).

Rev. Dan Vojir is has been writing/blogging on religion and politics for the better part of ten years. A former radio talk show host (Strictly Books " Talk America Radio Network) and book publisher, Dan has connected with some of the most (more...)
Related Topic(s): Blackwater; Conspiracy; Erik Prince; Extradition; Family Research Council; Homosexuality; Mercenary; People Robertson Pat; Prince; Proposition 8, Add Tags
Add to My Group(s)
Go To Commenting
The views expressed herein are the sole responsibility of the author and do not necessarily reflect those of this website or its editors.