As President Trump comes over-closer to being the fourth President to be subject to impeachment at one ormore stages, a variety of observers are comparing his potential impeachment with the real one of President Bill Clinton. Bret Stephens is the New York Times columnist who not too long ago came over from The Wall Street Journal who some have tried to peg as the "liberals' conservative." Both in his columns and in his occasional cable news appearances on various MSNBC outlets, he does often come across as a reasonably-voiced observer of the U.S.-in-the-Time-of-Trump. And recently he has tried to present a "reasonable" point of view in comparing the two impeachments (https://www.nytimes.com/2019/10/04/opinion/trump-clinton-impeachment.html?searchResultPosition=1 . Which led me to doing the same thing, but (surprise, surprise), coming to a rather different conclusion than Mr. Stephens did. In sum, he saw a number of similarities between the two events. I don't.

Although you would hardly ever know it from the way most Trumpublicans© talk about it, Clinton was impeached for one event: he lied to a grand jury about an extra-marital affair (in the White House, no less) with a consenting adult. Now there had been a wide variety of investigations --- "Whitewater," "Travelgate," and the Vince Foster "murder." Repubs. tried hard to find all sorts of criminal or at least unethical acts, but they could not. 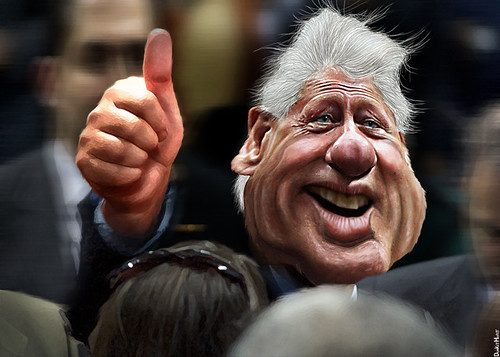 The New York Times played a major role in the whole affair, running negative story after negative story about the investigations in particular, from both the Editorial Page editor, Howell Raines, and a reporter whose name I have forgotten, but whose work (all later disproved) appeared frequently on the front page. The original investigations, under a Republican prosecutor from Chicago, had just about come to an end when under enormous pressure from the Gingrich Repubs., who felt that they just had to have something, Clinton's Attorney General (sic) Janet Reno agreed to have a new prosecutor appointed. That's where Determined-to-get-Clinton-for-something Ken Starr came in. And sometime after that is when Monica Lewinski came forward.

She claimed nothing more than that Clinton had had sex with her (although if we are to believe him, it was of the oral, not the vaginal, variety, as if that would have made any difference). The man committed adultery and then lied about it, to a grand jury. And that, and only that is what President Clinton was impeached for. Under the leadership of, wait for it, Lindsey Graham, he was impeached in the House, but acquitted at trial in the Senate.

And so, what about Trump and his possible impeachment, for which some folks just love to draw parallels with that of Clinton? Well, there's Ukraine/Biden/China. According to the Mueller Report, well-documented collusion with the Russians occurred before he became President, but who knows what the substance of his phone calls with Putin might contain. (It should be of course noted, although you would never know it from the original Barr cover-up and the continual screaming from Trump and Hannity, et al, there was indeed tons of episodes of collusion. With, however, just not enough evidence to prove a criminal conspiracy.) The Mueller Report also found numerous instances of obstruction of justice, but as is well-known, because of Justice Department policy Trump could not be indicted for them, while in office.

Treading water as Storm Clouds Gather. (What? You expected me to pick a complimentary picture of the man?)
(Image by Marvin Moose)   Details   DMCA

And then there are all other actions which might (or might not) be impeachable, ranging from unleashing Erdogan on the Kurds for no apparent reason, but after a recent phone call or two with the Turkish dictator, with bin Salman, and with . . . And then of course there is the litany of violations of the "Emoluments Clause."

Getting back to Stephens, he tries to come across as a "reasonable Republican." (And just listen to Paul Krugman on that one.) But in actual fact he isn't reasonable at all. For in the in the column cited above he compares the two as events as if they were totally comparable. But they aren't. Clinton was not accused of violating the Constitution, obstructing justice, and etc. Trump is. Most (but not all) Democrats supported Clinton, because they didn't think that the offense with which he was charged --- committing perjury on having an affair with a consenting adult --- rose to the level of a high crime or misdemeanor. The Trumpublicans© are supporting Trump on the grounds, basically, that the Impeachment clause in the Article Two of the Constitution does not, in their view apply to Trump. BUT, according to the Constitution, one would assume that that's what an inquiry in the House (the equivalent of a Grand Jury proceeding) is there to establish.

Trump and the Trumpites are following the tried-and-true Roy Cohn method (he the primary mentor of Trump), which he learned from his mentor, Sen. Joe McCarthy (with a side-bar along the way to Lee Atwater, advisor to President Reagan and H.W. Bush): "Always attack; never defend." (And sue at every opportunity too. Sound familiar?) Want to see it inaction, just watch-and-listen to Hannity, Giuliani, et al, on Fox and in the Congress, and of course Trump himself.

One cannot predict with any certainty how this will all turn out. Trump is in the fight of his life, and has plenty of allies to help him, along with the power of the Presidency. But with certainty one can say that this impeachment, if it actually does happen --- for obstruction, collusion, the Emoluments Clause violations, and etc. --- is nothing at all like the impeachment of Bill Clinton which, to repeat, was for lying under oath about an affair with a consenting adult.

Steven Jonas, MD, MPH, MS is a Professor Emeritus of Preventive Medicine at StonyBrookMedicine (NY) and author/co-author/editor/co-editor of over 35 books. In addition to his position on OpEdNews as a "Trusted Author," he is a Senior Editor, (more...)
Related Topic(s): Clinton Bill; Collusion; Congress; Impeached; Impeachment; Investigations; Krugman; Perjury; President; Putin; (more...) Republican; Trump, Add Tags  (less...)
Add to My Group(s)
Go To Commenting
The views expressed herein are the sole responsibility of the author and do not necessarily reflect those of this website or its editors.