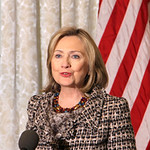 If Donald Trump continues to implode, Hillary Clinton will win simply by being the presidential candidate who isn't Trump.

But the prospect of a President Trump is so terrifying that Hillary shouldn't take any chances. The latest match-up polls show her about 6 points ahead -- a comfortable but not sure-fire margin.

What else can she offer other than that she's also experienced and would be the first woman to hold the job?

So far, she's put forth a bunch of respectable policy ideas. But they're small relative to the economic problems most Americans face and to Americans' overwhelming sense the nation is off track.

She needs a big idea that gives her candidacy a purpose and rationale -- and, if she's elected president, a mandate to get something hugely important done.

What could that big idea be? I can think of several big economic proposals. The problem is they couldn't get through Congress -- even if, as now seems possible, Democrats retake the Senate.

Nor, for that matter, could Hillary's smaller ideas get through.

Which suggests a really big idea -- an idea that's the prerequisite for every other one, an idea that directly addresses what's disturbing so many Americans today -- an idea that, if she truly commits herself to it, would even reassure voters about Hillary Clinton herself.

The big idea I'm talking about is democracy.

Everyone knows our democracy is drowning under big money. Confidence in politics has plummeted, and big money is the major culprit.

In 1964, just 29 percent of voters believed government was "run by a few big interests looking out for themselves," according to the American National Election Studies survey. In the most recent survey, almost 80 percent of Americans think so.

And because the free market depends on laws and rules, big money's political influence has rigged the economic system in favor of those at the top.

A study published in the fall of 2014 by Princeton professor Martin Gilens and Professor Benjamin Page of Northwestern shows that big money has almost entirely disenfranchised Americans. Gilens and Page took a close look at 1,799 policy issues, determining the relative influence on them of economic elites, business groups, and average citizens.

Their conclusion: "The preferences of average Americans appear to have only a minuscule, near-zero, statistically non-significant impact upon public policy." Instead, lawmakers respond to the policy demands of wealthy individuals and big business.

Related Topic(s): Democracy; Hillary Clinton, Add Tags
Add to My Group(s)
Go To Commenting
The views expressed herein are the sole responsibility of the author and do not necessarily reflect those of this website or its editors.