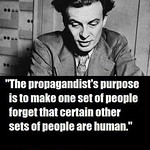 When it became apparent that U.S. global hegemony was being replaced by a multipolar world, the American ruling class decided it would be necessary to restart a 21st century cold war with Russia and China. Even before this new level of warfare became the priority, it was apparent to U.S. elites that if a long-term era of tensions between great powers were to be engaged in, it would require much greater governmental control over information provided to the domestic population.

This was the reasoning I believe the U.S. was using when it carried out the early-to-mid 2010s policies which have since led to a new cold war. The story of how the current cold war started follows in the same pattern as the run-up to the last one during the 1940s: the emergence of a threat to U.S. hegemony, a campaign to demonize Russia and its allies, and a period of escalating tensions, correlated with the creation of a new propaganda apparatus by the U.S. government.

To assemble the propaganda arsenal that it would need throughout the first cold war, the U.S. created the CIA, an unaccountable institution that began covertly influencing world politics from its founding in 1947. In 1948 the CIA created a covert action wing, called the Office of Policy Coordination, which was led by Wall Street lawyer Frank Wisner. The office's secret charter described its purposes as:

Through these tools, the CIA has since been spreading psychological operations (psyops) within American foreign propaganda outlets like Radio Free Europe and Radio Free Asia, as well as assimilating much of the American press through projects like Operation Mockingbird.

With 2013's amendment of key parts of the Smith-Mundt Act, the government freed this propaganda network to covertly broadcast messages to the American people with official legal impunity. Prior to then, the Smith-Mundt Act of 1948 had banned the domestic dissemination of U.S. government-produced propaganda. But when representatives Mac Thornberry and Adam Smith passed the "The Smith-Mundt Modernization Act of 2012" by slipping it into the 2012 National Defense Authorization Act, a routine piece of legislation that gets voted on and signed annually, that restriction was lifted. On July 2nd of 2013, the government finally began spreading its propaganda messages under the new rules.

The change was immediately visible. In July of 2013, John Hudson of Foreign Policy reported that the U.S. had begun the "unleashing of thousands of hours per week of government-funded radio and TV programs for domestic U.S. consumption." Since then, the repeal of the propaganda ban has created many strange and troubling trends for the American media, such as the emergence of a revolving door between intelligence officials and cable news stations, the government assimilation of formerly independent outlets like Vice News, and the enablement of Silicon Valley oligarchs like Jeff Bezos to partner with the military/intelligence complex while simultaneously exerting control over the media outlets they own (The Washington Post, in this case).

"Since 2013, newsrooms across the country, of both the mainstream and 'alternative' variety, have been notably skewed towards the official government narrative, with few outside a handful of independently-funded media outlets bothering to question those narratives' veracity", Whitney Webb of Mint Press News wrote last year about the propaganda ban repeal.

"While this has long been a reality for the Western media (see John Pilger's 2011 documentary 'The War You Don't See'), the use of government-approved narratives and sources from government-funded groups have become much more overt than in years past."

It's clear that the motivation behind the repeal of the ban was at least partly to get the U.S. government ready to manage a society which would soon be in an escalating state of great power conflict. In his initial press release on the bill, Thornberry said:

"We continue to face a multitude of threats and we need to be able to counter them in a multitude of ways. Communication is among the most important. This outdated law ties the hands of America's diplomatic officials, military, and others by inhibiting our ability to effectively communicate in a credible and transparent way. Congress has a responsibility to fix the situation."

At a moment when the U.S. empire was already in a state of rapid decline, and when Russia and China were subsequently turning into more effective perceived adversaries, I suspect this statement from a House neocon reflected a larger plan among the ruling class to create a propaganda apparatus for the coming new era of warfare.

Indeed, in the last six years it's been very much necessary for the U.S. empire to expand its efforts to control the sentiments of its own citizens. This recent escalation of government-engineered mass persuasion has involved not just propaganda, but censorship as well. And its emergence six years ago correlates with the U.S.-created proxy wars that started the new cold war.

The ramifications of the U.S. coup in Ukraine and regime change war in Syria

The fact that another cold war between the U.S. and Russia was imminent became clear when Washington began its latest attempt at regime change in Syria. In 2011, the terrorist groups that the U.S. had been arming and training started an ongoing campaign to destabilize Syria, having provoked armed conflict with the Syrian government in an attempt at violent revolt. Washington's proxy war on Syria was motivated both by a desire to advance Israel's interests, and by its larger-scale "need" to maintain control over Eurasia amid China's rise. Naturally, Russia's interests in Syria clashed with those of the U.S, and naturally this wouldn't be the end of Washington's provocations.

Related Topic(s): Cold War, Add Tags
Add to My Group(s)
Go To Commenting
The views expressed herein are the sole responsibility of the author and do not necessarily reflect those of this website or its editors.