"It's great that Russia is helping you and the campaign, right, George? George, you and your campaign are involved in hacking and working with Russia, right? It seems like you are a middleman for Trump and Russia, right? I know you know about the emails."

"I don't know what the f*ck you're talking about," Papadopoulos replied according to his recent book, "Deep State Target." But what if he had instead chuckled or said something stupid in order to puff himself up? Based on previous FBI entrapment cases, the answer seems clear: after threatening him with prosecution, the bureau would have outfitted him with a wire so that he could bring down other campaign officials. It wouldn't have stopped until it snared the ultimate prize Trump himself. 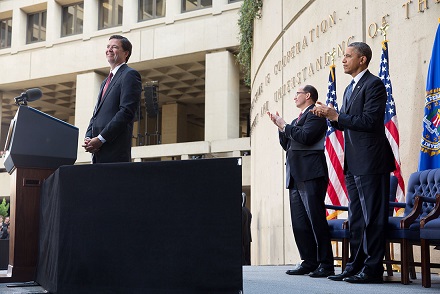 Trump told reporters in May he wanted Australia's role to be investigated by the Justice Department.

Comey's Trump Tower meeting was important because it led directly to the publication of the notorious dossier that would generate endless headlines and cripple the incoming Trump administration even though it was full of baloney.

Most of what we know about that meeting in the early days of the Trump administration comes from a memo that Comeydashed off minutes later and then lightly revised the next morning.

According to his memo, Comey met one-on-one with Trump to tell him about the Steele dossier because...

"the content [was] known at IC [intelligence community] senior level and ... I didn't want him caught cold by some of the detail... I said I wasn't saying this was true, only that I wanted him to know both that it had been reported and that the reports were in many hands. I said media like CNN had them and were looking for a news hook. I said it was important that we not give them the excuse to write that the FBI has the material ... and that we were keeping it very close-hold."

But Comey's memo was disingenuous, starting with his line about not wanting to give the media "the excuse to write that the FBI has the material." Leaks are an integral part of Washington, as an insider and a leaker like Comey knows.

As Comey must have also known, his very decision to brief Trump on the dossier wound up triggering press attention to it.

Four days later, Buzzfeed posted the dossier on its website. The source remains anonymous but it's easy to imagine that either Director of National Intelligence James Clapper or CIA Director John Brennan spilled the beans. They both accompanied Comey to the meeting and were appalled by Trump's call for a rapprochement with Russia.

Comey's memo also rings false where it says he "wasn't saying this was true, only that I wanted him to know both that it had been reported and that the reports were in many hands."

Glenn Simpson, the ex-Wall Street Journal reporter whose private Washington intelligence firm, Fusion GPS, commissioned the dossier on behalf of the Clinton campaign and the DNC, told the House intelligence committee that Steele began sharing his findings with the FBI "in July or late June" of 2016. (See p. 60 of testimony transcript).

That means that the bureau had the Moscow Ritz-Carlton report in hand six months prior to the Trump Tower meeting. Surely, this is enough time to reach some conclusion as to its veracity.

Had Trump fallen into Comey's trap, millions of Americans would no doubt have cheered -- and given Trump's dismal record in office -- who can blame them? But the implications are chilling, and not just for rightwing dissidents. Instead of electing presidents, Americans would merely submit them to the FBI for review.

Related Topic(s): 2016; Fbi Director James Comey; Intelligence; Investigation; Russiagate; Trump; Trump Cornered; Trump Scandal, Add Tags
Add to My Group(s)
Go To Commenting
The views expressed herein are the sole responsibility of the author and do not necessarily reflect those of this website or its editors.