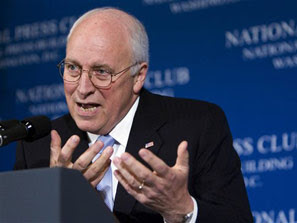 (Image by Unknown Owner)   Details   DMCA
We all remember the linePlay it again, Sam or The past is prologue). It was Al Pacino bemoaning his involuntary commitment to "the family." For all the horror and violence of his experience with them -and them with him- there was this strange and entirely irrevocable bond.

Maybe it was Sarah Palin's gosh gollee gee reconcilliation with the old guy that got me thinking. At the debate the other night she allowed as how she sure does like that "flexibility in there" that Cheney brought to the office (the same "flexibility" Joe Biden described as the most damaging disregard for the Constitution he's ever seen).

You might use the word "erratic" to describe the way McCain/Palin have handled themselves with regard to the current administration. McCain walked in (to the rescue) to the highly touted Bush bailout bill meeting a while back like he was visiting an imbecilic nephew on the matter of his depleted trust fund. Cheney's name was not mentioned once at the Republican National Convention -not once. There has been occasional reference to "blunders" of the current administration from both Palin and McCain, but thus far they have been kind enough not to name one -they've yet to name one, and when it comes to actual policy -well, you know how they say imitation is a form of flattery.

There's this love/hate thing going on. Nobody is really comfortable with the spooky uncle with the brass knuckles and the bag full of bloody rags in his closet. But still, when things get ugly -you gotta love him.

Consider this quote from an interview McCain gave author Stephen Hayes as he was preparing a book on Cheney. This was just over a year ago and McCain was asked whether he'd be interested in Cheney as a VP, or in some other administration role, McCain said: "I don't know if I would want him as vice president. He and I have the same strengths. But to serve in other capacities? Hell, yeah."

I guess the question becomes just who is giving whom an "offer they can't refuse" from 'The Godfather' (I guess it was one of the sequels and I honestly don't remember which one.)

Tom driscoll is an opinion columnist, poet, performiing songwriter (let's just say he writes).
Related Topic(s): Cheney Dick; McCain-John; Sarah Palin; Supporters, Add Tags
Add to My Group(s)
Go To Commenting
The views expressed herein are the sole responsibility of the author and do not necessarily reflect those of this website or its editors.