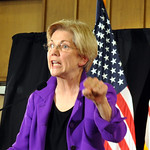 Elizabeth Warren
(Image by mdfriendofhillary)   Details   DMCA
Elizabeth Warren, 69, now leads a small advance guard of Democrats who appear to be moving deliberately toward challenging President Trump. Former Vice President Joseph R. Biden Jr., wielding a political network cultivated over decades, has been reasserting himself as a party leader, while Senators Cory Booker of New Jersey and Kamala Harris of California have emerged as fresher-faced messengers for the midterms. And Senator Bernie Sanders of Vermont, the runner-up in the 2016 primaries, has been acting like a candidate as he considers another race. All five have been traveling the country, raising money for Democrats and gauging the appeal of their personalities and favorite themes.
Read the rest of the story HERE: