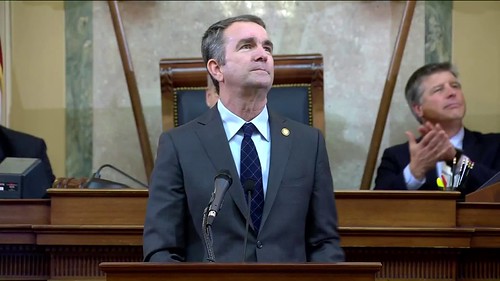 Virginia's Gov. Ralph Northam (D) is facing calls for resignation after a photo depicting two men, one in a Ku Klux Klan robe and another in blackface, appeared on a medical school yearbook page with his name on it. Northam admitted he was one of the men pictured. The Democratic Caucus in the Virginia House of Representatives and Virginia Senate have called on Northam to resign. Senate Dems released a statement saying, in part, "It is with heavy hearts that we have respectfully asked him to step down." Presidential candidates, including  Sen. Kamala Harris (D-CA),  Sen. Elizabeth Warren (D-Ma), Sen. Cory Booker (D-NJ) and Sen. Kirsten Gillibrand (D-NY) have followed suit. If Northam resigns, he would be succeeded by  Lt. Gov. Justin Fairfax, a 39-year-old African-American former lawyer who is considered a rising star in Virginia Democratic politics.

RT @washingtonpost: Virginia Gov. Ralph Northam's page in a 1984 yearbook features a photo of people in blackface and Ku Klux Klan apparel… at