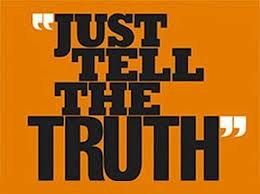 Telling The Truth . Yes or No? | WalkingInSunlight.com
(Image by walkinginsunlight.com)   Details   DMCA

" Imagine! A journalist breaks the decorum of a soft morning show to say “not true”! “If I hear something that I know to be untrue, then I think it’s my responsibility to point that out,” Stephanopoulos said. What is astounding is that such a statement is considered remarkable. News flash: Journalist thinks it’s his responsibility to nail untruth!  There are only two ways to respond to untruth. One is to challenge it bluntly, as Stephanopoulos did. The other is to challenge it with derision. This is a plain human reaction to egregious nonsense, flat-out garbage. It is the response of the full human being faced with the indefensible. It is to say, with appropriate emotion, that the press secretary’s statement is, well, laughable — that it doesn’t pass the laugh test."

Other Series: View All 46 Articles in "The Media: what it does and doesn't do"

Other Series: View All 218 Articles in "wWonderful writing ....must reads"