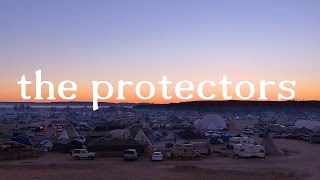 .The Protectors. - The truth behind the scenes at Standing Rock I journeyed to Standing Rock, North Dakota because I was hearing conflicting information on what was happening behind the #NODAPL protests. Are the ...
(Image by YouTube, Channel: Kory Easterday)   Details   DMCA

Evan Duke, veteran activist with the Border Support Network, is here in the Valley, taking a stand against the wall. He spent six months at Standing Rock and recalls some of the more harrowing moments.

"I can tell you we had some veterans having PTSD attacks. We were literally in a no-fly zone surrounded by snipers and flood lights and suddenly it's freezing temperatures and it looks like a war zone out there."

Duke says he learned from his experience; he does his activism work because it's the right thing to do and hopes it will inspire others to take a stand.

"What we saw at Standing Rock was a continuance of a movement and a reawakening of the indigenous movement a reigniting of those fires."