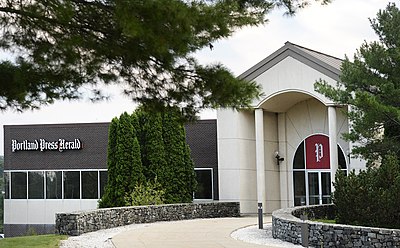 Portland Press Herald building.
(Image by (From Wikimedia) Molladams, Author: Molladams)   Details   Source   DMCA
Greg Kesich: Pettifogging, an old-fashioned word meaning “worrying too much about minor details,” is right to describe Maine’s senior senator. Instead of demanding to see all evidence of the president’s conduct before she voted on whether he is guilty of manipulating America’s foreign policy and national security interests to cheat in an election, she chose to get lost in the weeds.

Collins and every GOP Senator voted against seeing official documents from the State Department and OMB the White House refused to turn over to House investigators and against hearing from relevant witnesses like John Bolton. Collins was given the chance to demand to see all the evidence and instead voted to stick with the outward appearance of the last impeachment trial. Since we’re not in the Senate, we can call that what it is: pettifogging at its worst. Nadler was right. They voted for a cover-up.