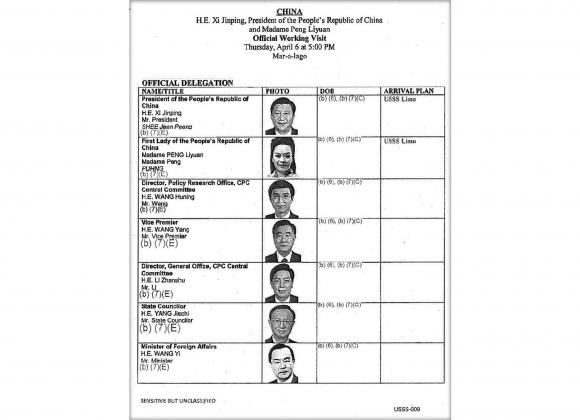 The Secret Service has just released nearly 150 heavily-redacted pages concerning a Chinese delegation’s visit to President Trump’s winter White House, Mar-a-Lago, in April 2017. The release is a belated response to a Freedom of Information Act appeal submitted by the National Security Archive, together with the Knight First Amendment Institute at Columbia University and the Citizens for Responsibility and Ethics in Washington (CREW), as part of a lawsuit to open the White House visitor logs and the records of presidential visitors to Trump properties, including Mar-a-Lago.

The new release on the Chinese delegation led by President Xi Jinping contains little substance and even redacts Xi’s birthday, which is public information (Wikipedia says his birthday is June 15, 1953).