There are powerful people in the US who steer the entire country on the path of confrontation with Russia, President Vladimir Putin warned, adding that the Kremlin must take this factor into account.

The warning came as Putin was addressing the senior members of the Russian diplomatic corps in Moscow. He spoke off the script to warn Russian ambassadors of the danger posed by Russia-haters in America. 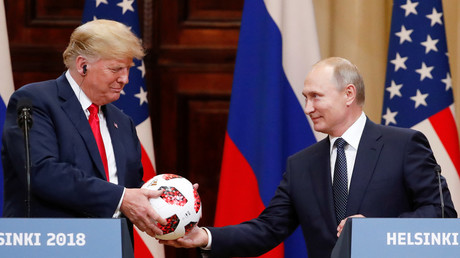 Donald Trump receives a football from Russian President Vladimir Putin in Helsinki, Finland July 16, 2018
(Image by RT website)   Details   DMCA
Haters would rather ‘go to war’ than see me getting along with Putin – Trump

"We can see forces in the United States, which would easily sacrifice Russian-American relationship for the sake of their ambitions in domestic political struggle in America. They would sacrifice the interests of the US business, which loses contracts and ties in Russia, US jobs, few as they may be, that rely on Russian-American cooperation,” Putin said.