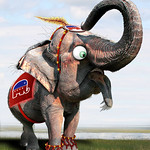 GOP Elephant
(Image by DonkeyHotey)   Details   DMCA
Freedom of the press may be guaranteed in the Constitution. But a plurality of Republicans want to give President Trump the authority to close down certain news outlets, according to a new public opinion survey by Ipsos. Republicans were far more likely to take a negative view of the media. Forty-eight percent of them said they believed “the news media is the enemy of the American people” (just 28 percent disagreed) while nearly four out of every five (79 percent) said that they believed “the mainstream media treats President Trump unfairly.”
Read the rest of the story HERE: