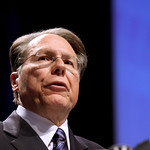 From flickr.com: Wayne LaPierre
(Image by Gage Skidmore)   Details   DMCA
Wayne LaPierre the head of America's powerful gun lobby says Democrats are putting politics ahead of school safety. He said "opportunists" are using the 14 February tragedy to expand gun control and abolish US gun rights. "They hate the NRA. They hate the second amendment. They hate individual freedom," he said, referring to the second amendment in the US constitution, which governs the "right to keep and bear arms." LaPierre condemned Democrats Nancy Pelosi and Chris Murphy, saying they were "eager to smear" the NRA.
Read the rest of the story HERE: