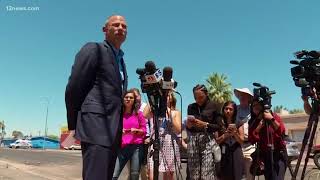 It all started with a California family reaching out for help. First they came after Donald Trump, and now they’re coming for immigrants. Not content to rest on the heady laurels of their slow takedown of the Commander of Cheese and his boy Cohen, Michael “Basta” Avenatti and his client Stormy Daniels are each gearing up to flex their new power against the cowardice and cruelty that defines the United States Department of Immigration and Customs Enforcement.