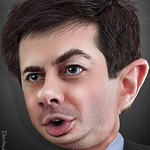 And while Buttigieg says he relishes the chance to compare records with the Repub. president, who received 5 draft deferments during the Vietnam War, there are warning signs for him of overplaying his service.

"It's good that Mayor Pete served, but there's a world of difference between driving a Chevy Suburban in Kabul, where plenty of foreigners walk around without a problem, and closing on the enemy in combat,” Moulton told the Washington Examiner in September. Moulton declined to be interviewed for this report...

Hollingsworth also said he might face questions about whether the image of him holding the rifle suggests to the viewer he was engaged in exchange of hostile fire.

“If I were writing his bio ad, I wouldn’t start with that,” Hollingsworth said. “The bulk of his time was not strapping on all kinds of weapons of war and taking your chances.”