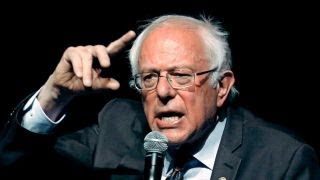 Bernie Sanders
(Image by YouTube, Channel: Fox Business)   Details   DMCA
Sen. Bernie Sanders, I-Vt., said on Thursday that "if" he decides to run for president again in 2020, he knows the issues he'll campaign on. Addressing speculation that he could enter the wide-open Democratic field, Sanders, 77, told NBC News' Andrea Mitchell that he would "make that decision when I think it's appropriate. If, and that is an if, I do decide to run, we're going to be taking on the pharmaceutical industry and the insurance industry, and Wall Street. And all of the powerful special interests who now control much of what goes on in Congress," he said.
Read the rest of the story HERE: