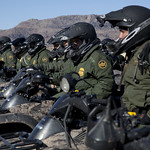 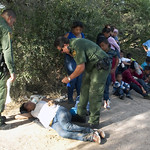 N.B. The above photos probably were taken at different times and places and juxtaposition is not intended to imply causality other than that seeking refuge is very strenuous for some people.

President Trump was a New York City real estate developer. They have a formula. Criticize groups whose members can't afford high rents (e.g, blacks, Hispanics, or refugees.) Spot a fleabag or Trophy building out of which you can wring more money. Criticize it too, but borrow heavily to buy it. Once yours, harass the low rent "undesirables" out: fail to repair broken water, gas, heat, light fixtures, windows, steps, etc. Evict those welfare no-accounts. Then remodel or destroy the building and develop some gentrified structure from which you can get much higher rent or resale.

Go to a civil Housing Court in New York. You'll see third rate white ambulance chasers suing largely old and/or poor, sick, addicted, minority and many luckless, uneducated and lawyer-less defendants. It's a brutal front of the age old war on the poor.

Trump's now applying this formula to America as a whole, like he and Putin "bought" fleabag America, although much run down by that Kenyan former manager. He's gonna' make it great again with armed ICE-men, tearing their kids from them and deporting as many as he can. Trump has weaponized some Americans' resentment against refugees. Gentrification is but one of Trump's demons loosed on America by his voters. But resentment's a poison you take hoping the other guy will die. Even his voters should now publicly cry out that they don't want America "gentrified' with such cruelty!

Related Topic(s): America; Extortion; Persecution; Shame; Stop Trump Movement; Trump Anger; Trump Bully In Chief; Trump Cruelty; Trump Mental State; Trump Wall Against Mexico, Add Tags
Add to My Group(s)
Go To Commenting
The views expressed herein are the sole responsibility of the author and do not necessarily reflect those of this website or its editors.