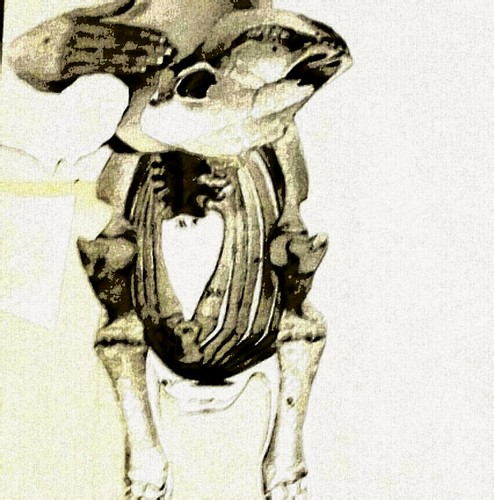 "In deepest, darkest Africa there is a place that is deeper and darker still. It seems that Africa was only "deepest and darkest" because black people lived there and white people wrote the stories. However, in this year 2025 there is a very deeply dark place in Africa. It was always a very arid place, however in 2025 it has become virtually uninhabitable because of day time temps consistently above 113, little to no available water, no edible herbs, vegetables or shrubbery, no edible game and very, very little shade. It almost never rains anymore and when it does it mostly evaporates. Yet, it was chosen as the perfect spot on which to Build the Donald J. Trump Presidential Library. This is not a joke.

I have to admit the structure is impressive, not beautiful by any means, but impressive. It is layer upon layer of jagged, gold tinted, oddly cantilevering concrete slabs, topped with a huge black iron finial kind of thing that resembles the arthritic claw of a beast, neither human nor identifiable animal.

The front entry, one can't believe that it wasn't intentional, resembles the anus of some sort of otherworldly beast or, it has been theorized that it may be modeled after Joseph Stalin's, based on descriptions in the diary of one of his lovers. Upon recognizing this I refused to enter so I can't describe the interior but I understand that there is a large screen playing video on a loop of Sean Spicer doing the fox trot on Dancing With the Stars. Also, there is supposed to be a room dedicated to Lindsey Graham, with a hologram of him naked shuffling across the floor in search of something at about his nose height.

The consensus is that Trump was never going to get a legitimate library but after the things he did in 2020 it was decided that the god awful place in Africa was the appropriate spot. I really don't recommend visiting..." From "My Travels to the Future with Sydney and Dale" By Franklin Cincinnatus

Related Topic(s): Donald Trump; Future; Iran; Presidential Library; Trump; Trump Against Climate Change; Trump Crime, Add Tags
Add to My Group(s)
Go To Commenting
The views expressed herein are the sole responsibility of the author and do not necessarily reflect those of this website or its editors.