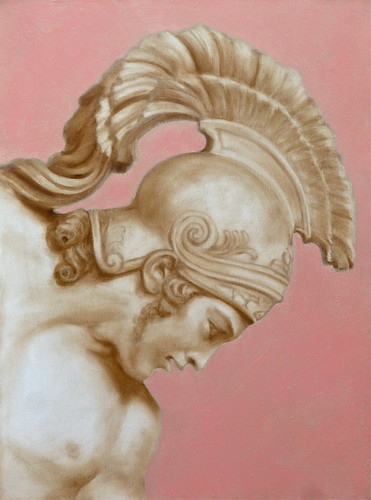 I feel the urge to write and even though I don't yet know the full extent of what will follow, the germ is there. Madeline Miller's stunning opus, mostly the two popular novels Circe and Song of Achilles are on my mind. They play off of each other beautifully: in one a goddess opts for mortality after reciting the woes of her status throughout Miller's pages; in the other, a hero descended from Zeus, Achilles, achieves immortality and ultimately in the arms of his lover.

Circe's yearning for mortality might be deduced from her passion for Odysseus, who goes after it willfully after being offered "deathless and free-of-old age" immortality. Even though she tempts Odysseus with immortality, Circe runs off with Odysseus's son, Telemachus, a mortal descended from gods, in the end, happily taking on this lower status herself, sick of the abuse she received relentlessly from her highborn kinspeople.

Note: Circe during Odysseus's sojourn with her [in the Odyssey] turns his crew into swine, expanding the spectrum to three levels of existence, though these days we are challenging the notion that "animals" are lower-status than humans on the consciousness-arc.

Note 2: Circe is ridiculed by her fellow gods for her human voice, because her lineage is hybrid, daughter of Helios and the nymph Perse [nymphs are lower level on the pantheon]. As Odysseus approaches her cave he hears her "within, singing with a lovely voice." I believe that the raucous tones assigned to her are Miller's innovation, effective in that they give the other gods a specific feature to ridicule in this ravishing creature.

Song of Achilles is one of the most beautiful, if not the most beautiful love story I have ever read. Need I say more? If you love this genre, don't hesitate to read about Homer's favorite hero (in my opinion), star of the Iliad, whose wrath propels the motion of this timeless epic. What is his wrath about? Deprivation of a love object, Briseis. What is the Iliad about, if not a passionate love affair that gave rise to its inverse, love breeding violence and destruction? And in mythology Achilles is killed by the arrow of the abductor of Helen, Paris, juxtaposing the mightiest of warriors with the agent of the Trojan war, who represents quintessential passion [and beauty]. Recall how Aphrodite rescues him from a confrontation with Menelaos into bed with Helen. Paris's unmatched archery skills represent the basest of athletics according to tradition, in that killing occurs from a safe distance, sort of like drone warfare these days, praised because it keeps human boots off the ground. Contrast the archery with the hands-on combat that dominates the fighting between Greece and Troy, face to face, spear ravishing anatomies Homer describes with the surgical precision of an expert. If the descriptions are formulaic, there are certainly reams of different ones!

Achilles achieves immortality and his lmortal lover, Patroclus, is allowed to ascend with hima tableau of eternal love like Ovid's two trees entwined forever, the metamorphosis of Baucis and Philemononly better. Do the trees retain consciousness? The Achilles couple do. Again, these days we're learning about the intricate communication among symbiotic plantlife, so who knows where flora are on the consciousness-arc?

And so, what resonates with me from reading these two wonderful novels is the protagonism of love and Miller's exquisitve handling of the rich body of material. We experience the agonies that godhood envelops, a domain of less interest to Homer, though he does discuss the conflicts that arise among them. She answers the question, "What's it like to be a god?" admitting us into Circe's stream of consciousness generously and credibly.

So which fate is more desirable in Miller's cosmos? Achilles' or Circe's? I'd go with eternal infatuation and adoration anytime, though Miller does not deal with the afterlie of Circe and Telemachus. Where do they go after death? Oblivion? Elysium? Who knows? I choose Achilles.

Related Topic(s): Novels, Add Tags
Add to My Group(s)
Go To Commenting
The views expressed herein are the sole responsibility of the author and do not necessarily reflect those of this website or its editors.