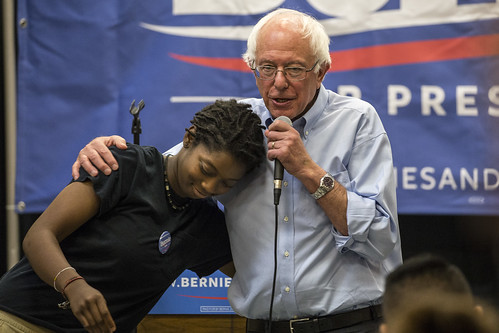 The seeming defeat of Bernie Sanders in the California Primary was unfortunate, but not unexpected. The fact that poll workers in California were told to foist NPP ballots on independents and Republicans who wished to vote for Bernie--ballots which I am sure would have remained uncounted and disposed of contrary to California law--together with the Associated Press's announcement that Hillary had, counting the super delegates (who should not voice a preference before the Convention, although many of them do), suppressed the vote sufficiently to make it appear she won. It's not over yet: those ballots are being counted, and a lawsuit has been filed to have all of the ballots--more than two million--counted .

Of course if she expects support from the hardcore Bernie supporters, the ones who began to beg him to run in 2014, she is whistling in the dark. I will vote for her, and I will explain why later, but only if the race between her and the GOP nominee--who by the rules should be Donald Trump, the man who would be Mussolini, but I have my doubts--is very here in Colorado, and Bernie isn't running as an independent or the Green Party's candidate. Otherwise, Jill Stein has my vote.

Why do I have such enmity towards Hillary Clinton. First is the fact that I hate dynasties: I opposed Hillary in 2008 on that principle alone. I oppose her now for that same reason. I remember the 1990's: the only good thing to say about them is they weren't the 1980's. If you don't believe me, I suggest you go out and pick up a copy of Thomas Frank's book Listen, Liberal, and read the facts. Welfare reform, the crime bill, prisons, the repeal of the Glass-Steagall Act, NAFTA: these were the actions of a moderate Republican, not a liberal Democrat. We have been so conditioned by the media and the reactionary Republicans that Bill Clinton was a liberal--and compared to them, he is--many of us have forgotten what real liberalism entails.

Second, Hillary is a neoliberal. This is a fancy way of saying she supports the continued destruction of the American middle and working classes, while supporting the continued growth of the wealth of our nation's top one percent. Neoliberism is inherently evil, by my definition that all evil begins when you turn human beings into things. George Monbiot pointed out the dehumanizing nature of neoliberalism in his article in Britain's The Guardian newspaper in April of this year, reprinted at Truthout.org:

"So pervasive has neoliberalism become that we seldom even recognise it as an ideology. We appear to accept the proposition that this utopian, millenarian faith describes a neutral force; a kind of biological law, like Darwin's theory of evolution. But the philosophy arose as a conscious attempt to reshape human life and shift the locus of power.

Neoliberalism sees competition as the defining characteristic of human relations. (This is called "Social Darwinism"--RJG) It redefines citizens as consumers, whose democratic choices are best exercised by buying and selling, a process that rewards merit and punishes inefficiency. It maintains that 'the market' delivers benefits that could never be achieved by planning.

Attempts to limit competition are treated as inimical to liberty. Tax and regulation should be minimised, public services should be privatised. The organisation of labour and collective bargaining by trade unions are portrayed as market distortions that impede the formation of a natural hierarchy of winners and losers. Inequality is recast as virtuous: a reward for utility and a generator of wealth, which trickles down to enrich everyone. Efforts to create a more equal society are both counterproductive and morally corrosive. The market ensures that everyone gets what they deserve.

We internalise and its creeds. The rich persuade themselves that they acquired their wealth through merit, ignoring the advantages--such as education, inheritance and class--that may have helped to secure it. The poor begin to blame themselves for their failures, even when they can do little to change their circumstances.

Related Topic(s): America; Aristotle; Civilization; Democracy; Equality; Evil; Health; Healthcare; Ideology; Neoliberalism; (more...) Oligarchy; Peace; Pensions; Solidarity; Tyranny; Unemployment, Add Tags  (less...)
Add to My Group(s)
Go To Commenting
The views expressed herein are the sole responsibility of the author and do not necessarily reflect those of this website or its editors.