Is My Bizarro Headline Sarcastic?

With Donald J. Trump dominating U.S. political news, it gets harder each day to tell which end is up. For example, interpreting Trump's pronouncements now seems to require a special tutorial. Among other (incontestably dubious) achievements, he seems to have totally smashed the conventional connection between sarcasm and tone of voice. 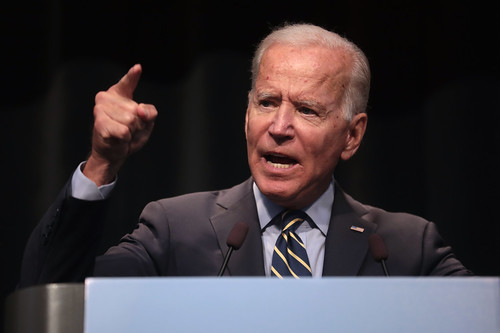 Compounding this difficulty, Trump has made several seemingly crazy or wildly irresponsible statements on Twitter that he later (conveniently) claimed were sarcastic. Lacking a level of "stable genius" comparable to his own, average clueless readers lacked both the tone of voice and verbal context to identify these gems of Trumpean wit as sarcastic.

Pitying readers, in days when sarcasm requires virtually the Holy Spirit's miraculous descent to distinguish from literal speech, I'll scrupulously identify the sarcastic and literal portions of my probably bewildering title. To wit, I intend the first eight words ("You Felt the Bern, Now Feel the Finger") as dripping sarcasm of the most bitter, scathing, venomous type--a sarcasm I hope goes so viral that it forces Biden's removal as candidate. But (assuming Biden gets shoved down our deeply revulsed throats) I mean the three words after the colon (Vote Biden 2020) in a sense so literal, sincere, and heartfelt that I'd swear them not only on every existing manuscript of the Bible, but on the Zend-Avesta and Bhagavad Gita to boot.

Why, readers might rightly ask, bizarrely yoke two such diametrically opposed sentiments in the same headline? Because I've learned, as redoubtable progressive journalist Paul Jay argues fellow progressives all must, to "walk and chew gum" at the same time. Or, in other words, to fulfill the savorless duty of voting for lesser-evil Democrats while not for one second withholding honest, richly deserved criticism. In the case of our current lesser-evil, Joe Biden, I find fulfilling this duty so unsavory that the shopworn trope of holding one's nose altogether ceases to apply. Instead, I'll be forced to choke back my vomit--or perhaps more aptly, given current events, to submit to finger-rape. And I find overwhelming political reasons not to keep my simmering disgust to myself.

Not merely are the two electable presidential candidates loathsome beyond all precedent. The impermissibly populist Bernie Sanders has provoked into plain sight an utter contempt for progressives establishment Democrats once manfully strove to conceal, so I'm certain many fellow progressives share my "simmering disgust" at pulling the 'D' lever. Still, with Trump's reptilian menace surpassing even the lowest expectations, I remain firmly convinced of our obligation to perform this stomach-turning duty. I can't honestly implore other progressives to follow my example--as I plan to here--without acknowledging the violence to decent sentiments it entails. Democrats--above all in the shape of Biden--have done literally nothing to earn progressives' support. So we should vehemently refuse to give it, even as we surrender our votes.

Now, simply surrendering our votes in silence would amount to an act of abject despair, a rewarding of bad behavior that does absolute diddly-squat to advance our noble, civilization-saving aims (summarized in the Green New Deal). Worse yet, it would fix Democrats more firmly than ever in smug, self-righteous contempt for our views. If we do submit--as Trump-based extortion dictates we must--to Democrats' finger-rape, there's no reason in the world we can't "walk and chew gum," surrendering our progressive purity while simultaneously "screaming rape." Indeed, by organizing in advance, we can collectively do so at ear-shattering decibel levels. That is what I mean by "weaponizing" lesser-evil voting.

But weaponized lesser-evil voting serves a far deeper strategic purpose than mere cathartic release of simmering progressive rage. By making the degradation of voting for Biden easier to swallow, it's probably justified on that ground alone, provided it motivates us to help defeat the civilization-threatening Trump. Regrettably, it might also appear juvenile on such grounds, creating undeserved bad optics for marginalized progressives merely motivating ourselves to perform a nauseating civic duty. If Democrats want our votes, they should really stop making us hate them; we can only take so much. However, weaponized lesser-evil voting finds its deeper justification as lynchpin of a novel, farsighted progressive strategy--one I plan to sketch here.

But Did Joe Do It? Democrats Are Guilty as Hell, in Any Case

Readers may think I'm being grossly unjust, rushing to believe a sexual assault charge there's not yet, and probably never will be, sufficient evidence to prove. And yes, in dwelling on finger-rape I am serving as judge, jury, and hangman--though not chiefly of Joe Biden (whom I do, for the record, wholeheartedly detest), but of today's beyond-hypocritical Democratic Party.