In America, a new flu strain emerges each year, infects millions, kills many thousands of people, mostly people who are elderly or unhealthy or both. The current flu season has already killed an estimated 8,000 to 20,000 Americans . The death rate is on the order of one patient in a thousand. In China, with four times the US population, a few thousand people have contracted the Wuhan coronavirus so far, and less than 200 have died. The death rate is estimated to be 2%, much higher than the flu, but less than previous epidemics like SARS and MERS and Ebola, all of which fizzled out. Also, the quoted death rate is likely to be an overestimate, because it doesn't count the many cases that are too mild to trigger a hospitalization or doctor's visit. Nevertheless, coverage in the news has been at panic levels, and the Chinese economy has been drastically curtailed; even world-wide, the economic blip has been noticeable.

Why is there a national lockdown in China, and panic around the world? Is there someone behind the media attention? Who has benefited from the slow-down? I've spent the morning investigating, and I conclude only that there are reasons, general and specific, for looking behind the curtain of the mainstream narrative. 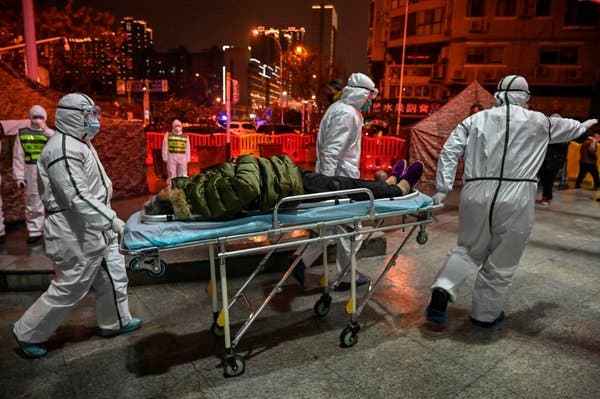 Event 201 and the Gates Foundation

Scientists at the Gates Foundation are really, really smart. They anticipated the mutation of a virus that would lead to a new epidemic. They anticipated that it was going to be the coronavirus. And they were so sure this was going to happen, that they invested in a British foundation that is developing a coronavirus vaccine. Reasons for suspicion of the one-day Event 201 are summarized in this video by Spiro Skouras.

Event 201 was held in New York last October 18, sponsored by the Gates Foundation, the JHU Center for Health Security, and the World Economic Forum. Participants created news reports based on a simulated, fictionalized coronavirus outbreak, and talked about a globally coordinated response. Their two big conclusions:

"Global health experts have highlighted that dis- and mis-information is wreaking havoc on the CAPS response [CAPS was the acronym for their fictional virus]. Healthcare workers are under attack in a number of locations due to rumors that they're purposely spreading the disease, and response efforts in many places have had to be suspended because of concerns around violence. Pharmaceutical companies are being accused of introducing the CAPS virus so they can make money on drugs and vaccines, and have seen public faith in their products plummet. Unrest due to false rumors and divisive rumors is rising, and is exacerbating spread of the disease, as levels of trust fall... This is a massive problem... some government are taking control of internet access, others are curtailing access, and a small number have shut down the Internet completely."

And how does it end? Saved by a vaccine! Government foot-draggers at last awaken to the urgent need, and they fund an emergency global vaccination program, putting aside regulatory red tape, like testing the vaccine for safety and effectiveness before trying it on millions billions of people. Johnson & Johnson to the rescue!

My take on this: Public scares about a new epidemic disease are a great opportunity for corporate profit and for government to tighten the noose of authoritarianism. Both these things are happening already. But was the epidemic created and spread for this purpose? While "I wouldn't put it past them," I haven't seen direct evidence yet that points in this direction.

Wuhan is home to a Chinese bioweapons lab, that was working on a weaponized version of coronavirus, stolen from a Canadian bioweapons lab. Is the current outbreak derived from an accidental release of a bioweapon? It wouldn't be the first time. Genetic analysis could make this case, but it hasn't yet been done. (Remember 2001, when genetic analysis traced the anthrax letters in the Senate to an American bioweapons lab in Bethesda.) Development and use of bioweapons has been banned since the First World War, but major military forces of the world maintain bioweapons labs that are nominally for defense against other nations that might not be so honorable. Of course, the US has by far the biggest bioweapons research facilities in the world, $3 billion per year acknowledged in the Congressional budget, speculatively much more in a DoD black budget.

My friends in China tell me this is being treated as a national emergency. It's the New Year holiday week, something like Christmas in America, when families travel by train and plane, when people gather at restaurants and theaters and the consumer economy experiences a yearly surge. But this year, flights and train travel have been severely curtailed. Restaurants, theatres, concerts, bars -- even shopping malls are all closed. People can still shop online, but delivery trucks won't deliver, so everyone has to pick up their on-line purchases at central drop-off locations (think Amazon hub lockers), which have become the main places where people see each other. It's normal for schools and businesses to be closed for the New Year, but the closure was early this time, and re-opening has been pushed back an extra 2 weeks to 17 February.

Wuhan is completely locked down as of 22 January; no one can leave the city. But before that, there was a mass exodus, with about 5 million people fleeing, more than one-third the population of the metropolitan area. Some of these people are spreading the infection--all it takes is a few.