Most Sanders supporters may soon learn a harsh lesson. A lesson in how excessive political optimism--as opposed to hopeful realism (embodied in Antonio Gramsci's brilliant adage "pessimism of the mind, optimism of the will")--can instantly turn to political despair. The type of despair, in fact, where once-fired-up "revolutionaries," having basked for months in "feeling the Bern," return broken-hearted and empty-handed to their heatless hearths, murmuring that politics just isn't worth it. 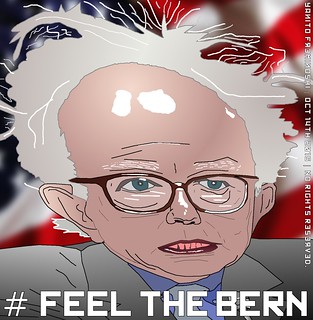 Is the flame of political revolution about to .Bern. out?
(Image by Yanitof)   Details   DMCA

All of which simply proves what Sanders has said all along: that political revolution is "bigger than Bernie," and that even in victory, he would need behind him a movement, willing to march by millions in the streets, to succeed in overhauling our radically corrupt political system.

Unfortunately, he never prepared his followers for the prospect of defeat. Which seems to be coming.

What's worse yet, he declared last year that if he lost, he would support the Democratic nominee . For ardent revolutionaries, that's a flagrant counsel of despair, since that nominee--Hillary Clinton--is precisely as revolutionary as Marie Antoinette. In other words, the type revolutionaries introduced to Monsieur Guillotine in days of yore and gore--certainly not the type they campaigned for. Yet that's what exactly what "milquetoast revolutionary" Bernie will soon ask us to do.

Desperation is not despair, but a last-ditch attempt to ward off the worst, made by people who realize the worst is likely. And in this case, the desperation move I suggest--rallying behind Revolt Against Plutocracy 's Bernie or Bust pledge --is guaranteed to ward off the worst. For the worst is not Hillary Clinton being nominated--and there's certainly no guaranteed way to ward off that. Rather, the worst is Hillary Clinton being nominated without a savage opposition movement in place, one that regards her as warmly and trustingly as French sans-culottes regarded Marie Antoinette. For, whatever Bernie's deficiencies as a political revolutionary, he's a virtual gold standard of integrity and good policy among incumbent national politicians, and Hillary is almost Bernie's anti-matter. The hideous bait-and-switch involved in swapping Bernie for Hillary is best summarized in a play on Marie Antoinette's infamous words: "Let them eat FAKE." Political revolutionaries, demanding the wholesome bread of system overthrow, must vomit at the prospect of eating fake.

Unfortunately, neither Berniacs nor the Sanders-skeptical Left really seem up to the task of seizing this ideal moment for political revolution. As a betting man, I'd say the most likely--and utterly dismal--prospect is a Clinton presidency wherein Bernie's vaunted revolution disappears without a trace. "Not with a bang but a whimper," as poet T.S. Eliot memorably wrote.

Consider, first, the Berniacs. I use the term "Berniacs" affectionately, by the way; if I meant derision, I would use CounterPunch editor Jeffrey St. Clair's incisive coinage "Sandernistas." The term "Berniacs" suggests derision, because, as a coinage based on maniac, it implies excessive obsession with Bernie Sanders, a case of having "Bernie on the brain." However, I would argue that in our dire political circumstances the obsession was fully justified: here's a once-in-a-lifetime case of a progressive politician, uncorrupted by political money, running for president in one of America's two electable parties, focused obsessively on the lynchpin problem of political money, and causing endless nightmares for the pin-up girl of corruption by such money, Hillary Clinton. Unlike the Sanders-skeptical Left (some of whom later honestly recanted; see here , here , and here ), I applauded Sanders' decision to run as a Democrat, giving him a huge mainstream audience and the prospect (as Revolt Against Plutocracy terms it) of "radicalizing the mainstream." Whatever the Faustian bargain involved in Sanders' decision --above all, the probably imposed condition of supporting the Democratic nominee--Bernie's Democratic candidacy has been a wildly successful case of reaching mainstream voters with an unprecedentedly leftist message they were ready to hear. Up to and including the taboo word socialism.

If I have a bone to pick with my fellow Berniacs, it's not their obsession with electing Sanders, whose presidency could make a night-and-day difference in U.S. politics--a difference fully meriting the honored name of political revolution. Rather, it's their naïve, utter lack of seriousness about political revolution--their pure Pollyanna optimism that corporatist Democrats and equally corporatist mainstream media would let Bernie win without ferocious resistance: that they would respect honest debate, democratic process, and popular will. I fully expect CounterPunch managing editor Joshua Frank (author of the wake-up call article I cited earlier ) will prove right, Hillary will unjustly defeat Bernie in a series of primaries, and Bernie's revolution will be swept away like so much chaff in a reactionary tempest. Unless Sanders supporters embrace the revolutionary willfulness of desperation. As embodied in the Bernie or Bust pledge .

If I have a bone to pick with my fellow "Berniacs," I have an even bigger one to pick with the Sanders-skeptical Left. Sure, you've shown yourself politically less naïve than Berniacs--but have you come anywhere close to their insight? Basically, that they perceived--as you decidedly did not-- that Bernie Sanders was anti-establishment enough to build on, that he (whatever his deficiencies as a full-blown socialist ) would make even the taboo word socialism (which you yourselves never succeeded in reviving) respectable among mainstream voters. If Bernie's revolution tragically ends "not with a bang but a whimper," the Sanders-skeptical left, in its ideology-driven paralysis, will have a lot to answer for.

But time still remains for the Left to redeem itself--but only at the price of aiding Berniacs in their desperation efforts, via the Bernie or Bust pledge, to elect Sanders. For the only real prospect of near-term reform is the prospect--based on considerable empirical evidence --of convincing the Democratic Party that nominating Hillary Clinton virtually guarantees losing the presidency to Republicans. An effort of persuasion we-- a united movement of Berniacs and Sanders-skeptical leftists--help along by pledging our refusal to vote for corporatist Clinton.

What the Left has to gain from this supporting this desperation effort by Berniacs to elect Sanders--a far better prospect than anything else remotely possible--is a united, energized movement ready to offer savage opposition to Clinton or any Republican, along with many first-time Green voters who've acknowledged the Green Party as a vastly preferable alternative to Bernie than Clinton. What the Left has to gain from nonchalantly leaving Berniacs to their electoral disappointment--and likely political despair--is absolutely squat. It's almost inconceivable how psychologically tone-deaf the Left has been in expecting severely disappointed Sanders supporters to arise as a post-Bernie movement when they themselves haven't shown the faintest trace of sympathy for Berniacs' very rational support of their genuinely insurgent candidate. One might think leftists, understandably skeptical of Berniacs in their days of ardent hope, might at least come to Berniacs' aid--for movement-building's sake--in their days of desperation. But even this minimal, sympathetic act of buoying Berniacs' declining spirits seems beyond the ken of the ideological Left.

Consider CounterPunch managing editor Joshua Frank, who at least has the decency (in the article I've twice cited) to acknowledge disappointed Berniacs as potential revolutionaries. But his calling them to carry on revolutionary effort in the face of profound electoral disappointment strikes me as being unreasonable as asking Jesus' disciples to continue the "Jesus movement" in the face of their Master's crucifixion without their purported encounters with the risen Christ. If one wishes to motivate the crestfallen, one might at least come to their aid in their moment of desperation.

But the prize for leftist tone deafness surely belongs to Chris Hedges. As I acknowledged in my comment to Hedges' most recent article, Hedges is a true U.S. prophet, worthy of honoring, alongside Noam Chomsky, as the "conscience of America." But Hedges, so long "a voice crying in the wilderness" (as in heroic opposition to the Iraq War ) has apparently gotten so accustomed to the political wilderness that he never wishes to leave it. Far worse than Frank, he simply supports likely Green Party presidential nominee Jill Stein, without for one second acknowledging why quite reasonable average people might support the far more electable Bernie Sanders, or without considering for one second ( as Stein herself clearly considers ) that Berniacs, predictably stiffed by the Democratic establishment, could soon--in a truly revolutionary "bait-and-switch"--become Stein's most ardent supporters.

Bottom line: the desperation move of taking the Bernie or Bust pledge is the only real hope for carrying on Bernie Sanders' political revolution, and if leftists won't show Sanders supporters the minimal support of taking it, they might as well postpone all hopes of revolution until the Second Coming. And knowing leftists as I do, they probably will.