The technology exists to combat climate change -- what will it take to get our leaders to act? 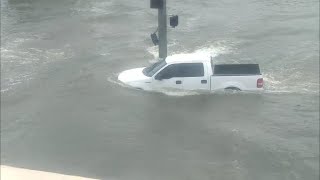 If we don't win very quickly on climate change, then we will never win. That's the core truth about global warming. It's what makes it different from every other problem our political systems have faced. I wrote the first book for a general audience about climate change in 1989 -- back when one had to search for examples to help people understand what the "greenhouse effect" would feel like. We knew it was coming, but not how fast or how hard. And because no one wanted to overestimate -- because scientists by their nature are conservative -- each of the changes we've observed has taken us somewhat by surprise.

The surreal keeps becoming the commonplace: For instance, after Hurricane Harvey set a record for American rain storms, and Hurricane Irma set a record for sustained wind speeds, and Hurricane Maria knocked Puerto Rico back a quarter-century, something even weirder happened. Hurricane Ophelia formed much farther to the east than any hurricane on record, and proceeded to blow past Southern Europe (whipping up winds that fanned record forest fires in Portugal) before crashing into Ireland. Along the way, it produced an artifact for our age: The warning chart that the National Oceanic and Atmospheric Agency issued shows Ophelia ending in a straight line at 60 degrees north latitude, because the computer program never imagined you'd see a hurricane up there.

"When you set up a grid, you define boundaries of that grid," a slightly red-faced NOAA programmer explained. "That's a pretty unusual place to have a tropical cyclone." The agency, he added, might have to "revisit" its mapping software.

In fact, that's the problem with climate change. It won't stand still. Health care is a grave problem in the U.S. right now too, one that Donald Trump seems set on making steadily worse. If his administration manages to defund Obamacare, millions of people will suffer. But if, in three years' time, some new administration takes over with a different resolve, it won't have become exponentially harder to deal with our health care issues. That suffering in the interim wouldn't have changed the fundamental equation.

But with global warming, the fundamental equation is precisely what's shifting. And the remarkable changes we've seen so far -- the thawed Arctic that makes the Earth look profoundly different from outer space; the planet's seawater turning 30 percent more acidic -- are just the beginning. "We're inching ever closer to committing to the melting of the West Antarctic and Greenland ice sheets, which will guarantee 20 feet of sea-level rise," says Penn State's Michael Mann, one of the planet's foremost climatologists. "We don't know where the ice-sheet collapse tipping point is, but we are dangerously close."

The latest models show that with very rapid cuts in emissions, Antarctic ice might remain largely intact for centuries; without them, we might see 11 feet of sea-level rise by century's end, enough to wipe cities like Shanghai and Mumbai "off the map."

There are plenty of tipping points like this: The Amazon, for instance, appears to be drying out and starting to burn as temperatures rise and drought deepens, and without a giant rainforest in South America, the world would function very differently. In the North Atlantic, says Mann, "we're ahead of schedule with the slowdown and potential collapse" of the giant conveyor belt that circulates warm water toward the North Pole, keeping Western Europe temperate. Its tipping points like these that make climate change such a distinct problem: If we don't act quickly, and on a global scale, then the problem will literally become insoluble. We'll simply move into a dramatically different climate regime, and on to a planet abruptly and disastrously altered from the one that underwrote the rise of human civilization. "Every bit of additional warming at this point is perilous," says Mann.

Bill McKibben is the author of a dozen books, including The End of Nature and Deep Economy: The Wealth of Communities and the Durable Future. A former staff writer for The New Yorker, he writes regularly for Harper's, The Atlantic Monthly, and The (more...)
Related Topic(s): Climate; Energy; Scientists; Solar; Universe; Winning, Add Tags
Add to My Group(s)
Go To Commenting
The views expressed herein are the sole responsibility of the author and do not necessarily reflect those of this website or its editors.