Click Here to Remove All Ads
Source: The Guardian
The US attorney general vows not to prosecute journalists, but his criminalisation of whistleblowers undermines that assurance 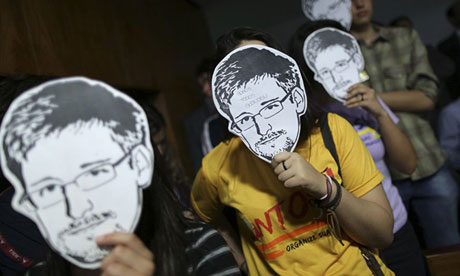 Another week and another wave of stories on the NSA and the unconstitutional out-of-control surveillance state hit the digital newsstands, showing once again why the tide is turning. Some revelations are so surreal, it's hard not to assume they're satire. NSA chief Keith Alexander seems to be modeling his ambitions and visions for international spying after General Curtis LeMay's views on nuclear war.

Meanwhile, despite the massive smear campaign against Edward Snowden, opinion polls stand clearly with the truth-tellers. People know they have a right to know what the government is doing in their names. State secrecy is on the run, while American privacy, long rumored dead, is alive and kicking and wants the fight out in the open -- in the sunlight and in the public square.

Last month, though, Glenn Greenwald's partner, David Miranda, was detained at Heathrow airport for almost nine hours, while on a journalistic mission paid for by the Guardian. His electronics were seized, and he was forced to hand over his social media passwords under the threat of imprisonment. He was detained under the UK Terrorism Act -- for an act of journalism. This was an assault on press freedom that should make every reporter shudder no matter their opinion on the NSA.

The message was sent. It gave a whole new meaning to "Miranda rights." A Miranda warning, in effect.

Perhaps worse, we learned a few days later that the United States had been given a "heads up" by their British counterparts that they were planning on detaining Miranda. The US government didn't lift a finger to stop this blatant attack on journalism and press freedom -- even as it has been moving heaven and earth to bring Edward Snowden back to the US. That should be a scandal in its own right.

Now, the US owes its citizens and the international community another "heads up": on whether the United States will do the same to journalists working on NSA stories who are entering the United States. Put simply, will Attorney General Eric Holder, the US State Department, and the FBI promise safe passage to journalists, their spouses and loved ones, and vow not to interfere with their reporting on these NSA stories?

So far, the answer has been far from clear.

Glenn Greenwald and Laura Poitras, the two American journalists at the center of these stories, have been doing their reporting from Brazil and Germany respectively. The US government has not, so far, stated publicly whether they can enter the country without receiving the same outrageous treatment that Miranda received. Or worse.

Can they practice journalism in the United States, without their hard drives being confiscated, without an unconstitutional search-and-seizure taking place at the border? Are they free to enter the United States without being served a subpoena, or even jailed? Unlike the UK, the United States is supposed to be bound by the first amendment of the constitution, which exists to bar such treatment of journalists.

Poitras, a filmmaker and journalist universally respected in her field, has already been a victim of the ever-expanding surveillance state: since her widely praised film My Country, My Country debuted in 2006, she has been detained while crossing the US border over 40 times. She is editing her upcoming film on whistleblowers in Berlin, because of fears her footage will be seized in the United States.

She's not alone. Jacob Appelbaum, a security researcher, a Tor developer and journalist in his own right, has been harassed while going over the border for years, simply by virtue of his association with WikiLeaks, whose "crime," apparently, is publishing government secrets in the public interest -- something we know established newspapers do all the time.

I should note that I consider both Glenn and Laura friends, as we all sit on the board of the Freedom of the Press Foundation (FPF) together. But the reason this should concern not only me and the FPF, but everyone in the US, is not because of any specific people; we must look at these assaults from a broader perspective.

We care about the individual journalists under attack -- Greenwald, Poitras, Appelbaum, Miranda, Julian Assange, James Risen -- and the whistleblowers themselves -- Snowden, Thomas Drake, John Kiriakou, Chelsea Manning, Julia Davis, Russ Tice -- in all these fights. But it's not just the risk and courage of the individuals that inspire and call us to action.

That's what the FPF was founded for: we needed a movement protecting the first amendment in its broadest reach.

John Cusack makes films.
see his bio at IMDB.com
Related Topic(s): Edward Snowden; Eric Holder; First Amendment; Journalism; Reporters; Whistleblowers-ing, Add Tags
Add to My Group(s)
Go To Commenting
The views expressed herein are the sole responsibility of the author and do not necessarily reflect those of this website or its editors.

What Is an Assange?

What Is an Assange? Part 2