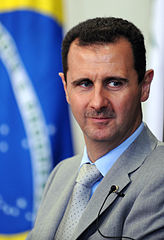 Once again a plan for democratic transition in Syria has been drawn up by a coalition of opposition groups meeting in London, supported by the usual suspects in the shape of Turkey, the EU, US, and Gulf States. It is described as a detailed plan committing Syria to democratic and religious pluralism. Predictably, and the reason why it is a non-starter, it contains the pre-condition of Bashar al-Assad's removal from power.

The coalition behind this ludicrous scheme goes by the name of the Higher Negotiating Committee (HNC), and is said to comprise 30 different "moderate" political and military groups united in the objective of removing Assad as the country's president. Who exactly these people represent in Syria itself, nobody knows. What we do know is that Assad retains the support of the vast majority of his people, who will not accept any colonial arrangement to depose their president.

The gall of those who demand the removal of a government that has played an indispensable role in the country's survival over five long years of unremittingly brutal conflict against the forces of hell, unleashed as a direct result of the destabilization of the region by the US and its allies starting with the war in Iraq back in 2003, is simply staggering. London, the scene of the colonial and imperialist crime of Sykes-Picot in 1916 -- plotted, prepared, and organized to deprive the Arabs of their right to self-determination and sovereignty -- is 100 years later the scene of a crime to deprive the Syrian people their sovereignty and dignity under the guise of a plan for democratic transition.

There is no greater example of democracy than an army supported by a people refusing to bow in the face of unrelenting barbarism. As British journalist and Middle East correspondent Robert Fisk revealed earlier this year, 60,000 Syrian officers and men have perished in the most brutal and merciless conflict the region has witnessed since the Iran-Iraq war between 1980-88. Not only has the Syrian Arab Army -- made up of Christians, Alawites, Sunnis, Shia, and Druze soldiers -- faced along with its Lebanese and Iranian allies an enemy so barbaric and murderous it bears comparison with the Khmer Rouge in Cambodia in the 1970s, it has done so knowing that their fellow soldiers and civilians have been slaughtered by forces supported by neighboring states such as Turkey, Saudi Arabia, Qatar, Jordan, etc., along with their Western backers.

And these are the countries and governments the Syrians are expected to trust with their future?

The Syrian government's crime in the eyes of the West is not the lack of democracy -- how could it possibly be given the longstanding alliance between Western governments and Saudi Arabia, run by a clutch of medieval potentates? -- but rather the fact that Syria under Assad has long refused to bend the knee to US and Western hegemony, especially with regard to the country's support for the Lebanese resistance movement, Hezbollah, and its friendship and alliance with Iran. Together they make up an axis of resistance which Washington and its regional allies have long been intent on breaking.

Despite the courage and tenacity of the Syrian Arab Army and people, there is little doubt they would have succeeded in this endeavor without Russia's intervention in the conflict, beginning at the end of September 2015. When Vladimir Putin addressed the 70th General Assembly of the United Nations days prior to Russian aircraft flying their first sorties against anti-government forces in Syria, he effectively announced the birth of the multipolar world demanded by Russia's recovery from the lost decade of the 1990s, caused by Washington and its European allies' attempt to impose a Carthaginian peace on the country in the wake of the demise of the Soviet Union, along with China's ferocious economic growth and global footprint.

Russia's military intervention was and continues to be a remarkable achievement of logistics, planning, and organization, necessary in the successful projection of hard power thousands of miles beyond its own borders. It has allowed it to showcase some of the most advanced aircraft, missile systems, and technologically advanced weaponry in the world today, beating Washington at its own game in the process. This, to be sure, is the real reason for the demonization of Putin that has been a mainstay of Western media coverage over the past year and more.

Vladimir Putin and Russia have staked too much in the outcome of the conflict in Syria to allow Assad to be thrown under the bus in service to a contrived and transparent attempt to depose him under the guise of a peace plan. This is not to claim that Assad should lead Syria in perpetuity. It is, however, to claim that the government of Syria is a matter for the Syrian people and that at this point Assad's survival is coterminous with Syria's survival as a non-sectarian, secular state.

But let's not delude ourselves that the timing of the unveiling of this latest effort to depose Assad has anything to do with alleviating the biblical suffering of Syria and its people. It is not. Instead it comes as evidence of the desperation of those who are losing the war.

The objective of those who have suffered and sacrificed so much is victory not transition.

John Wight is the author of a politically incorrect and irreverent Hollywood memoir -- Dreams That Die -- published by Zero Books. He's also written five novels, which are (more...)
Related Topic(s): Bashar Al-assad; Putin; Syria; Syrian Support Group, Add Tags
Add to My Group(s)
Go To Commenting
The views expressed herein are the sole responsibility of the author and do not necessarily reflect those of this website or its editors.