The current mass exodus of people from Central America to the United States, with the daily headline-grabbing stories of numerous children involuntarily separated from their parents, means it's time to remind my readers once again of one of the primary causes of these periodic mass migrations.

Those in the US generally opposed to immigration make it a point to declare or imply that the United States does not have any legal or moral obligation to take in these Latinos. This is not true. The United States does indeed have the obligation because many of the immigrants, in addition to fleeing from drug violence, are escaping an economic situation in their homeland directly made hopeless by American interventionist policy.

It's not that these people prefer to live in the United States. They'd much rather remain with their families and friends, be able to speak their native language at all times, and avoid the hardships imposed upon them by American police and other right-wingers. But whenever a progressive government comes to power in Latin America or threatens to do so, a government sincerely committed to fighting poverty, the United States helps to suppresses the movement and/or supports the country's right-wing and military in staging a coup. This has been the case in Guatemala, El Salvador, Mexico, Nicaragua and Honduras. 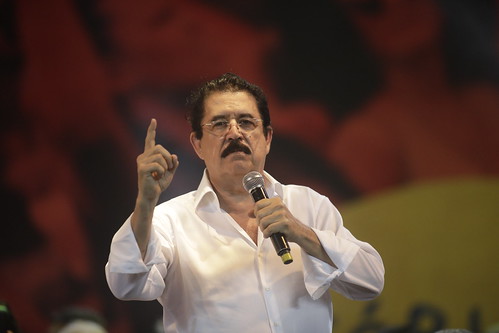 The latest example is the June 2009 coup (championed by US Secretary of State Hillary Clinton) ousting the moderately progressive Manuel Zelaya of Honduras. The particularly severe increase in recent years in Honduran migration to the US is a direct result of the overthrow of Zelaya, whose crime was things like raising the minimum wage, giving subsidies to small farmers, and instituting free education. It is a tale told many times in Latin America: The downtrodden masses finally put into power a leader committed to reversing the status quo, determined to try to put an end to two centuries of oppression " and before long the military overthrows the democratically-elected government, while the United States -- if not the mastermind behind the coup -- does nothing to prevent it or to punish the coup regime, as only the United States can punish; meanwhile Washington officials pretend to be very upset over this "affront to democracy" while giving major support to the coup regime. Top Ten Ways You Can Tell Which Side The United States Government is On With Regard to the Military Coup in Honduras." Also see William Blum, Killing Hope, chapters on Guatemala, Nicaragua and El Salvador.

"> The resulting return to poverty is accompanied by government and right-wing violence against those who question the new status quo, giving further incentive to escape the country. Talk delivered by William Blum at the Left Forum in New York, June 2, 2018

Each of you I'm sure has met many people who support American foreign policy, with whom you've argued and argued. You point out one horror after another, from Vietnam to Iraq to Libya; from bombings and invasions to torture. And nothing helps. Nothing moves these people.

The most basic of these basic beliefs, I think, is a deeply-held conviction that no matter what the US does abroad, no matter how bad it may look, no matter what horror may result, the government of the United States means well. American leaders may make mistakes, they may blunder, they may lie, they may even on many occasions cause more harm than good, but they do mean well. Their intentions are always honorable, even noble. Of that the great majority of Americans are certain.

Frances Fitzgerald, in her famous study of American school textbooks, summarized the message of these books: "The United States has been a kind of Salvation Army to the rest of the world: throughout history it had done little but dispense benefits to poor, ignorant, and diseased countries. The U.S. always acted in a disinterested fashion, always from the highest of motives; it gave, never took."

And Americans genuinely wonder why the rest of the world can't see how benevolent and self-sacrificing America has been. Even many people who take part in the anti-war movement have a hard time shaking off some of this mindset; they march to spur America -- the America they love and worship and trust -- they march to spur this noble America back onto its path of goodness.

Many of the citizens fall for US government propaganda justifying its military actions as often and as naively as Charlie Brown falling for Lucy's football.

The American people are very much like the children of a Mafia boss who do not know what their father does for a living, and don't want to know, but then they wonder why someone just threw a firebomb through the living room window.

This basic belief in America's good intentions is often linked to "American exceptionalism". Let's look at just how exceptional America has been. Since the end of World War 2, the United States has:

This is indeed exceptional. No other country in all of history comes anywhere close to such a record. But it certainly makes it very difficult to believe that America means well.

William Blum is the author of: Killing Hope: US Military and CIA Interventions Since World War 2 - Rogue State: A Guide to the World's Only Superpower - West-Bloc Dissident: A Cold War Memoir Freeing the World to Death: Essays on the American Empire.
Related Topic(s): Guatemala; Honduras; Imperialism; Nicaragua; Refugees; United States Exceptionalism, Add Tags
Add to My Group(s)
Go To Commenting
The views expressed herein are the sole responsibility of the author and do not necessarily reflect those of this website or its editors.