Sun Yat-Sen hat I wear, to which I have pinned the iconic Mao Zedong silhouette badge.
(Image by Jeff J. Brown)   Details   DMCA

Pictured above: my Sun Yat-Sen hat I wear, to which I have pinned the iconic Mao Zedong silhouette badge. Below his bust is his famous mantra, "Serve the People", written in his very recognizable calligraphic style. Many people do not notice, but on the back is the millennial governance motto, "Preserve the Peace". Walking around the streets and in buildings here, you can see Mao's famous calligraphic chant all over the place. Nothing has changed about governance in China for 5,000 years.

In the first part of this essay, I showed why Western leaders are generally so bad (https://chinarising.puntopress.com/2019/07/30/why-are-western-leaders-gawd-awful-bad-and-chinas-so-darn-competent-part-i-china-rising-radio-sinoland-190730/ ). The one sentence answer is they are almost always suborned to serve the interests of the 1% at the expense of the 99%.

There is a corollary explanation for this. European cultures and their spinoffs in the rest of Eurangloland, including Israel are founded on violence and theft. If you don't believe this goes back to the Jewish Torah/Christian Old Testament, here is a quick review of Westerners' predilection for killing, destroying, plundering first and asking questions later (http://skepticsannotatedbible.com/cruelty/long.html and http://commonsenseatheism.com/?p=21).

I created a comparative Excel table using Wikipedia's pages on Conflicts in Europe, United States and China(https://en.wikipedia.org/wiki/List_of_conflicts_in_Europe, https://en.wikipedia.org/wiki/List_of_conflicts_in_the_United_States and https://en.wikipedia.org/wiki/List_of_conflicts_in_Asia#Mainland_China_(People's_Republic_of_China) . Europe's list has 760 entries, the US's 250 and China's 315. Europe's long list really starts in 1,100BC and does not include all of the genocidal horrors in the Torah/Old Testament before that. The US's only starts in 1775, which is wishful propaganda. As Roxanne Dunbar-Ortiz clearly proves in her book, A Native Peoples' History of the United States, genocidal wars to exterminate the many millions of First Nations' peoples started Day One with the colonial landing at Jamestown in 1607. and the killing has never stopped. China's goes back to 2,500BC, so is over twice as long as Europe's and compared to the US, almost ten times longer.

To sum up, Europe's list of conflicts dates back 3,100 years and lists 760, the US's starts 230 years ago, with 250 conflicts and China's starts over 4,500 years ago and has 315. Interestingly, one-third of all China's conflicts happened during its century of humiliation, 1839-1949, when the West terrorized and plundered the country, while addicting one-fourth of the people to opium, morphine and heroin.

This, while the West's numbers are probably grossly understated, since over the centuries, it has committed thousands of government overthrows, invasions and occupations to protect colonial businesses around the world.

The above statistics speak for themselves. Eurangloland, including Israel conducts its business and trade using violence and expropriation. China, no. This contrast is even more remarkable, when looking at landmass and populations. When the Roman Empire was at its greatest expansion, 200AD, China had six times as much land and nine times as many people, but clearly was experiencing much less conflict, not nine times as much. 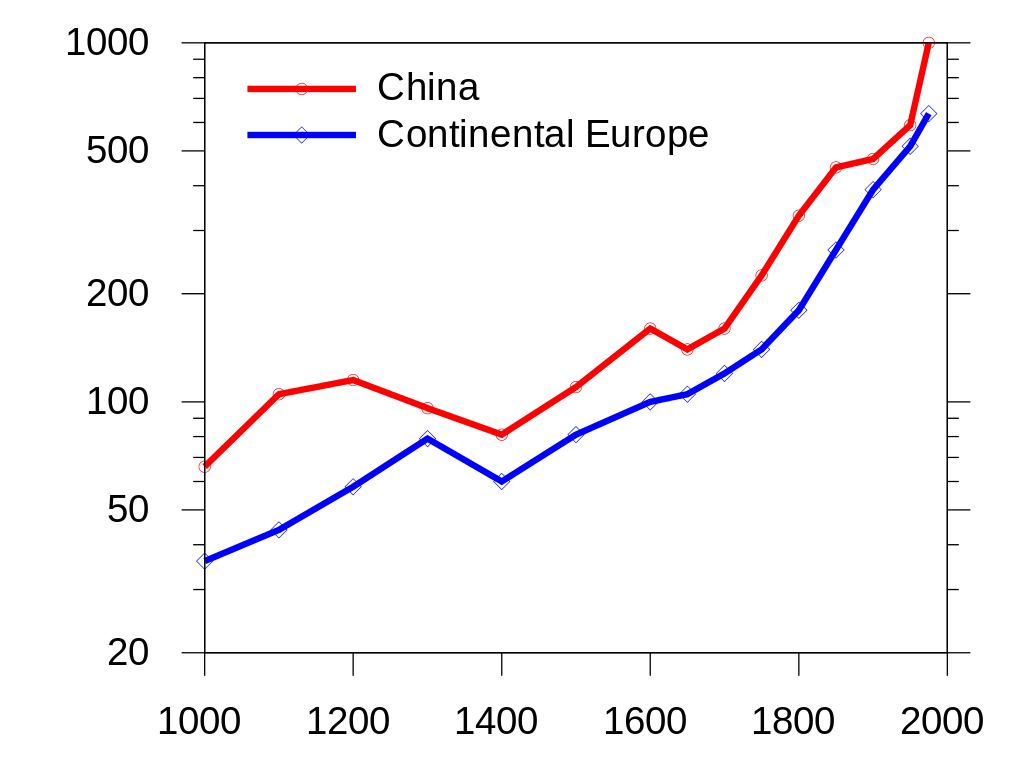 As the above chart shows, China has always had many more people than Europe, yet has lived with much less violence and plunder. This is because European cultures are founded on genocide, slavery and the violent plunder of other peoples' natural resources. For 5,000 years, Chinese civilization has been based on agriculture, animal husbandry and mutually profitable cross border trade.

Proof of this is ample. The Chinese Asian land and African maritime Silk Roads predate Jesus Christ and they did not send out armies to rape and plunder their neighbors, like Alexander the Great, the Christian Crusades and onto modern colonialism and robber baron capitalism. The Chinese conducted state diplomacy, traded goods and technology.

If the Chinese had the same DNA for violence and theft that Westerners do, we'd all be speaking Mandarin today. The Chinese were sailing the high seas many centuries before the rest of the world and had Star Wars weapons compared to Europe and elsewhere, with advanced guns, powerful cannons, rocket propelled grenades, flame throwers, sea and land mines, not to mention chemical and biological bombs. They were so far ahead of the rest of the world in military and other technologies, that they could have easily crushed every city and people they came into contact with, like defenseless bugs. Yet, they fanned out across the planet and no one was ever attacked, unless the Chinese visitors were attacked first, which happened very rarely, given what they arrived with. They just wanted to do win-win business and exchange technology.

Westerners and Israelis can only think about other peoples in terms of war and exploitation. Since that is their world vision, they cannot assimilate the Chinese's millennia of external non-violence and, Let's do some business ethos. Cognitive dissonance overwhelms Euranglolanders when this is shown them and they sink into denial and self-serving mythology. They fall back on moral equivalence, Well, everybody else does it too. Not true, American Natives, Africans, and Asians (excepting the Christianized Genghis Khan family and Japan adopting the Western imperial playbook during its Meiji Restoration) have not blanketed the planet like killer locusts, devouring everything within their reach. Only Euranglolanders have done this and continue to do so.

This concept of Chinese governance and international trade goes back millennia, with the Confucist-Daoist-Buddhist concept of ren, which means forbearance, relenting and retreating. You will never begin to understand how and why the Chinese live and work, until you wrap your head around ren (忍). Ren is also the Chinese foundation for governing the country and leading the people. I highly recommend taking a few minutes to read/listen/watch these articles (https://chinarising.puntopress.com/2019/07/20/wests-hong-kong-color-revolution-still-making-a-mess-of-the-place-and-totally-backfiring-china-rising-radio-sinoland-190720/ and http://chinarising.puntopress.com/2017/11/10/all-the-chinese-people-want-is-respect-aretha-franklin-diplomacy-on-china-rising-radio-sinoland-171110/).