Faina Savenkova is 11 years old and in the 6th grade. She lives in Lugansk, LNR (Lugansk People's Republic). Faina has lived more than half of her life during a war, half of her life hoping for peace. She wants the children of Donbass to be heard by adults.

Her essay is important and the parallels she draws to the Second World War are both poignant and real.- Translator note 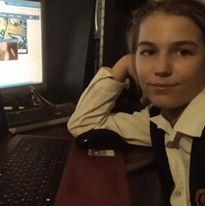 War is air raids, the roar of artillery and tanks, the cannonade of shots ... It has many sounds and many faces. She sneaks up and falls upon you with all her strength when you least expect her. And hiding you count the gaps between the shells. One. Two. Three ... Lord, thanks for passing by.

And then the guns fall silent. And in this silence, the crying of a child can be heard. Silent sobs, similar to a kitten's plaintive meow.

And then the shelling begins again, drowning everything ... This is why the children of the war are quiet. They know their crying will remain unheard.

The summer of 1941 was very hot. Under the scorching sun, fields burned out and small rivers drying up, the nights were still cold and dark. The country was alive. No one expected trouble to knock on the door. People, of course, understood that war could soon begin, but they tried to believe in the best, in good. Just the same as we did in 2014.

Vasily, one of my great-grandfathers turned 41 in the year 1941. He was going to go to college and dedicated to himself a year toward study, he submitted the documents. But his dreams were not destined to come true. War had come. Then, there was no going to the institute.

War can do a lot. Grind a huge number of people under its millstone, bring destruction and hunger. It can change the fate of an entire generation. Leaving marks and scars in its memory. But if you resist it, then the war slowly recedes. And we remember our heroes and how hard this victory was gained.

Is it a lot or a little - the years taken from a peaceful life? For all the people, June 22, 1941 was the date that changed life to "before" and "after". All these long painful years, my grandfathers and relatives fought for victory and for life. The war tested them for strength, tempered character, and created new personalities from them.

And I am proud that none of them became a traitor and a policeman (the 3rd Reich used local Ukrainian nationalists as police to hunt the resistance).

My great-grandfather Vasily was an artilleryman. He broke through the encirclement (ringed in by Nazi forces) with many soldiers at that time. He could just have given up, but he broke through battling to help his own. After this, even with a concussion, he again returned to his colleagues at the frontline after escaping from the hospital because he understood he was defending his homeland, his land.

He could not have done otherwise. The whole country could not do otherwise. During this time, his mother received three death notices for him. I'm even afraid to imagine what she felt every time. But, nevertheless, later my great-grandfather fought in the war against Hitler and helped liberate Prague, serving until 1949.

My other great-grandfather and both great-grandmothers were too young, so they stayed behind.

And it is still unknown where it was harder: at the front or at home, whereas children they worked on an equal basis with adults, blistering their hands bloody with the strain.

"Everything for the front! All for victory! " For them, these were not empty words, so no one grumbled. And everyone did what he could. After all, they believed in their innocence and in the need to defeat fascism for the sake of a future world.

Related Topic(s): Child Killers; Despair; Donetsk; Fascism; Frontline; Lugansk; Peace, Add Tags
Add to My Group(s)
Go To Commenting
The views expressed herein are the sole responsibility of the author and do not necessarily reflect those of this website or its editors.