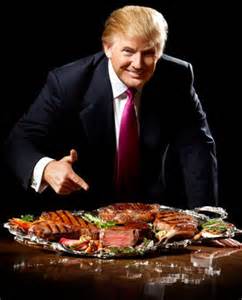 Copyrighted Image? DMCA
In this, the summer of Trump, the mainstream media is turning itself inside out to try to explain the phenomenon of candidate Trump's popularity within the Republican electorate, according to polls. They've scrutinized everything from his hand movements and his word choices, to his dog whistle calls to racism and sexism. I would argue, however, that Donald J. Trump is simply the perfect embodiment of the central underlying philosophy of the radical right movement that has taken over the Republican Party: the idea, that some of us are people, and others are simply natural resources.

Think about the two groups that Trump has spent the most time demonizing: women and undocumented workers from Mexico. (The fact that he claims he "cherishes women" and "lovesMexicans" only goes to underscore the opposite message.) One of the most energizing messages for Trump's Republican audiences has to do with the idea that Mexican laborers are taking American jobs and squandering taxpayer resources (complete with the dripping-with-disdain imageryof a heavily pregnant Mexican woman dropping her baby over the border so that we have to "take care" of it). One of the other popular objects of disdain, of course, is Planned Parenthood - an organization that provides health care services for women. If there is a single thread that ties these two "demons" together, it is the notion that women and immigrants share a status as resources, rather than full human beings.

As Amy Grenier pointsout in the online publication Immigration Impact, the fact is that our economy profits quite handsomely from the contributions of undocumented workers, who pay lots of taxes for services they are not allowed to receive.

In a fascinating book by Aviva Chomskywhich is excerptedat Truthout.com, she shows how 1) US laws created more, not less, undocumented workers; and 2) racialized Mexican immigrants in a way that separated those thought of as potential citizens from those thought of as disposable - and deportable - workers. In short, the fear of being overrun by "illegal aliens" is a manufactured one.

Then there's women reproductive rights, and the attack on Planned Parenthood. Advocates of women's reproductive health rights might have noticed that calls for the preventive care that Planned Parenthood does, have not made a dent in the fury over the latest fake scandal created by deceptively editedvideo. There is a reason for that lack of concern for women's health: like disposable laborers, the bodies and labor of women are resources to be exploited, not persons to be protected. (This insight owes a great debt to the work of two women: Marilyn Waring, and Carol J. Adams ; the former highlighted how women's work is missing from economic accounting, the latter showed how animals and women are equally oppressed - i.e., exploited as resources). Trump's focus on women's appearance, while he claims to cherish us, only serves to underscore that utilitarian approach.

The ultimate paradox of the GOP's stance on women's value to society, is while they ignore our economic contribution, their single-minded obsession with our bodies only serves to underscore just how important to them our contribution is. Rather than making it easier for us to care for loved ones, however, they would rather punish us for our choices.

Trump is a perfect vehicle for both of these exploitative philosophies, because he sprinkles them with a heavy dose of resentment, at a time when inequality is at an all time high. While some have called Trump a "populist" (in part, because of some of his positions on taxes and social security), that populism does little to address the real source of the angst he addresses, as long as it's aimed at the wrong people. To counter his message, Democrats like Bernie Sanders need to reclaim the contributions of those targets of the GOP, along with their cries of "inequality!"

Related Topic(s): Disposable; Donald Trump; Health; Inequality; Rights; Women, Add Tags
Add to My Group(s)
Go To Commenting
The views expressed herein are the sole responsibility of the author and do not necessarily reflect those of this website or its editors.