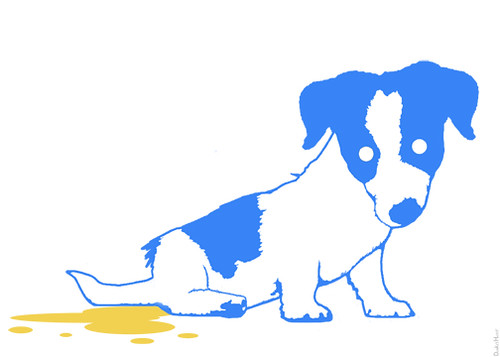 Blue Dog Made a Piddle
(Image by DonkeyHotey)   Details   DMCA

Progressive activists often see a frustrating pattern. Many Democrats in office are good at liberal platitudes but don't really fight for what we need. Even when constituents organize to lobby or protest, they have little leverage compared to big campaign donors, party leaders and corporate media spin. Activist efforts routinely fall short because -- while propelled by facts and passion -- they lack power.

Right now, in dozens of Democratic congressional districts, the most effective way for progressives to "lobby" their inadequate representatives would be to "primary" them. Activists may flatter themselves into believing that they have the most influence by seeking warm personal relationships with a Democratic lawmaker. But a credible primary campaign is likely to change an elected official's behavior far more quickly and extensively.

In short, all too often, progressive activists are routinely just too frigging nice -- without galvanizing major grassroots power.

With rare exceptions, it doesn't do much good to concentrate on appealing to the hearts of people who run a heartless system. It may be tempting to tout some sort of politics of love as the antidote to the horrors of the status quo. But, as Martin Luther King Jr. wrote shortly before he was murdered, "love without power is sentimental and anemic." Beyond speaking truth to power, it's crucial to take power away from those abusing or squandering it.

In the long run, constituents' deference to officeholders is a barrier to effectiveness -- much to the satisfaction of people who reap massive profits from the status quo of corporate power, rampant social injustice, systemic racism, vast economic inequities, environmental destruction and the war machinery.

If activists in New York's 14th Congressional District had been content to rely on lobbying instead of primarying, Alexandria Ocasio-Cortez would still be tending bar -- and power broker Joe Crowley would still be serving his corporate clients as a Democratic leader in Congress.

Related Topic(s): Bluedog Democrats; Primary; Primarying, Add Tags
Add to My Group(s)
Go To Commenting
The views expressed herein are the sole responsibility of the author and do not necessarily reflect those of this website or its editors.