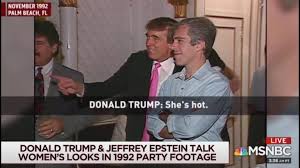 (Image by hightlighthollywood.com)   Details   DMCA
ld hardly believe my eyes this morning, when I read in Alternet that Jeffery Epstein was found dead in his jail cell of apparent suicide. And I find it hard to believe that he killed himself, especially since he's been on "suicide watch" since the discovery of apparently self-inflicted marks on his neck ten days ago. Instead, I suspect he was killed by the CIA. My suspicion is based on my close reading for the past few days of muckraker, Whitney Webb's three-part expose', "The Jeffery Epstein Scandal: Too Big to Fail."

Webb's series makes the point that the Epstein pedophilia scandal threatened to blow apart the entire U.S. government house of cards. It opened up a potentially devastating window not only on the sordid lives of Epstein and his close friends, Donald Trump and Bill Clinton, but on the profound corruption of the entire U.S. government and of international politics as a whole. Though connected with the pedophilia scandal in the Catholic Church, the scale of the Epstein branch of institutionalized child abuse absolutely dwarfs the shameful hypocrisy of justly vilified ecclesiastical criminals.

Epstein's federal trial was scheduled to begin next summer. This means that the details of his crimes (and, more importantly, those of his high-placed patrons') would steal headlines at the height of the general election of 2020. The evidence to be presented there is said to comprise more than one million pages.

In the light of what I'll detail below, one can only imagine the surprises contained therein and whom those pages implicate. And given Epstein's close association with Donald Trump and the Clintons (not to mention the other billionaire residents of Palm Beach Island in Florida), the trial and evidence presented at that crucial moment would likely have had an impact of the presidential election. Wayne Madsen for one, speculates that it may have already influenced the resignations of several Republicans from the House of Representatives.

Epstein, of course, is the alleged hedge fund tycoon whose central role in a pedophilia network came to light when he was arrested last July on Federal charges of sex trafficking of minors in Florida and New York. Previously, he had been convicted of molesting an underage girl, but had mysteriously served what's been described as the most lenient sentence in history for crimes like his -- 13 months in a county jail during which he was free to leave during the day.

Alexander Acosta, Donald Trump's Secretary of Labor was responsible for securing the ludicrous sentence, when Acosta served as Attorney General for the Southern District of Florida. On Epstein's arrest last July, the FBI found hundreds of photos, videos, and recordings of child molestations some of them allegedly involving prominent public figures.

According to Webb's expose', the Epstein story is merely the tip of a dark iceberg much bigger than most of us realize. The darkness below the surface stretches back more than 75 years. It involves not only Epstein, but the CIA, its Israeli counterpart the Mossad, the Mafia as a CIA asset, the mysterious MEGA Group of influential billionaires, many government officials, and other high rollers with familiar names.

Webb's series unveils what she terms "Government by Blackmail" an all-encompassing political strategy that began at least as far back as the conclusion of the Second Inter-Capitalist War. As the phrase suggests, Government by Blackmail consists in luring heads of state and other powerful world figures into compromising situations (often with underage "prostitutes" of both sexes), filming them in the process, and then using such evidence as leverage to extort huge sums of money, to extract favors and actually shape the world's political economy. It extended to the Mafia, for instance, a virtual license to kill without legal repercussion.

As an alleged intelligence asset himself (of either the CIA, Mossad, or both) Epstein's job was to gather the required evidence. To that end, he placed in compromising and seductive situations government officials from across the world. His mansions, private islands, and fleet of jet planes provided the venues. They were the sites of fabulous parties featuring alcohol, drugs, and underage "call boys" and "call girls." All the locales were equipped with sophisticated recording devices, both audio and video, and two-way mirrors for recording acts of criminal pedophilia and other crimes or embarrassments on the parts of Epstein's "friends" and acquaintances. Invitees included heads of state from across the planet Donald Trump and Bill Clinton, of course, among them.

But, Webb reveals, Epstein is only the latest iteration of Government by Blackmail. He's the clone of figures like the Mafia kingpin Myer Lansky, and Lew Rosenstiel (of Schenley distilleries). During the '70s and '80s Rosenstiel, Lansky's close friend, regularly threw what his fourth wife (of five) called "blackmail parties." According to Webb, the photos and recordings gathered there long kept Lansky out of trouble from the federal government. They also delivered entire cities to Mafia control in the post WWII era. In fact, Lansky entrapped for blackmail purposes, numerous top politicians, army officers, diplomats and police officials. He had photos of FBI director, J. Edgar Hoover in drag and performing homosexual acts.

Rosenstiel's protegee and successor as blackmailer-in-chief was Roy Cohn, who at the age of 23 was a close adviser of Senator Joseph McCarthy. More importantly, he was also associated with Mafia bosses, J. Edgar Hoover, the Reagan White House and has been described as a mentor of Donald Trump. His mentor!

Simultaneously, Cohn took on the central role in the blackmail pedophile racket Lansky and Rosenstiel had started. As usual, its main targets were politicians often interacting with child prostitutes. That was the source of Cohn's power. So were his dear friends in high places including (besides Clinton and Trump) Ronald Reagan and his wife Nancy, Barbara Walters, Rupert Murdoch, Alan Dershowitz, Andy Warhol, Calvin Klein, Chuck Schumer, William Safire, William Buckley, William Casey, and top figures in the Catholic Church.

It's those latter figures that connect Cohn's pedophile ring as inherited by Jeffery Epstein with the Church's scandal. It directly involved "the American pope," Francis Cardinal "Mary" Spellman, and Cardinal Theodore "Uncle Teddy" McCarrick. Father Bruce Ritter's Covenant House (a multi-million-dollar charity for homeless and run-away boys and girls) was also deeply implicated. In fact, when Ritter's involvement in sex acts with his underage protegees came to light, it was secular powers more than ecclesiastical forces that rallied to his defense.

Another pre-Epstein blackmail king was Craig Spence, a former ABC News correspondent who became a prominent DC lobbyist and CIA agent. All during the 1980s he provided child prostitutes and cocaine for Washington's power elite. For purposes of blackmail, Spence used the now-familiar devices of video cameras, tape recordings, and two-way mirrors. His little black book and "favor bank" records have been described as involving a Who's Who of Washington's government and journalistic elite, this time including Richard Nixon, William Casey, John Mitchell, Eric Sevareid, John Glenn, and key officials of the Reagan and George H.W. Bush administrations, as well as media celebrities and military officers. According to the Washington Times, during the Bush administration, Spence had permission to enter the White House late at night to supply "call boys" to top level officials there.

Significantly, in the light of Epstein's demise, just shortly before his death (also quickly ruled a suicide) Spence expressed fears that the CIA might kill him -- apparently for knowing too much about connections between Nicaragua's Contras and CIA cocaine smuggling to support them. But according to Spence himself, his knowledge went much deeper. Shortly before his similarly alleged suicide, he told Washington Times reporters: "All this stuff you've uncovered (involving call boys, bribery and the White House tours), to be honest with you, is insignificant compared to other things I've done. But I'm not going to tell you those things, and somehow the world will carry on."

Related Topic(s): Blackmail; Conspiracy; Expose; Government; Mafia; Pedophilia; Pizzagate; Scandal; Suspicious Death; Trump, Add Tags
Add to My Group(s)
Go To Commenting
The views expressed herein are the sole responsibility of the author and do not necessarily reflect those of this website or its editors.