New Years, New Beginnings, A Promise to Reach Higher Tomorrow or whatever one thinks of as resolutions we must understand our nature and the nature that surrounds us in every endeavor, no matter how small or thought of as insignificant in our daily lives.

The Committee of Five (which consisted of Jefferson, John Adams, Benjamin Franklin, Roger Sherman, and Robert Livingston) edited Jefferson's draft. Their version survived further edits by the whole Congress intact, and reads: We hold these truths to be self-evident, that all men are created equal, that they are endowed by their Creator with certain unalienable Rights, among these are Life, Liberty and the pursuit of Happiness. It was then further edited and adopted by the Committee of the Whole of the Second Continental Congress.

We find this to be a universal message, here is another although it comes from a different messenger not Christian as were the founding fathers of the US Constitution but the message does not waiver regardless.

One great question underlies our experience, whether we think about it consciously or not: What is the purpose of life? I have considered this question and would like to share my thoughts in the hope that they may be of direct, practical benefit to those who read them.

I believe that the purpose of life is to be happy. From the moment of birth, every human being wants happiness and does not want suffering. Neither social conditioning nor education nor ideologies affect this. From the very core of our being, we simply desire contentment. I don't know whether the universe, with its countless galaxies, stars and planets, has a deeper meaning or not, but at the very least, it is clear that we humans who live on this Earth face the task of making a happy life for ourselves. Therefore, it is important to discover what will bring about the greatest degree of happiness. New Year's Eve, December 31, 2018 DALAI LAMA: WHAT IS THE PURPOSE OF LIFE?

Has any group ever accomplished such aspirations?

In charge of Bhutan's Gross National Happiness Center, Saamdu Chetri says they aim to have 100% of the population happy. At present the Bhutanese are only 92% happy, with 8% of the population unhappy, but the government is working on changing this.

Sandwiched between India, China and Tibet, the tiny mountain kingdom of Bhutan is home to some truly big ideas. Here, happiness is designated by law, and in the 1970s an official policy of 'Gross National Happiness' was embraced. 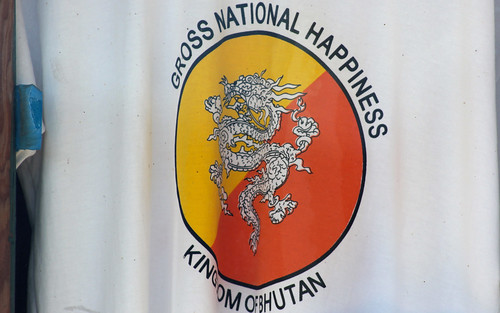 Today, nearly 50 years on, Bhutan's 'happiness guru', Saamdu Chetri , who is tasked with ensuring every single person in Bhutan is happy, says this vision of ensuring national happiness has been taken up by many other countries around the world, and they have centers in Thailand, France, Switzerland and Germany. They are also gearing up for centers in South Africa, the UK, USA, Spain and Vietnam. And, in 2011, an incredible 193 countries at the UN decided we need to have Gross National Happiness, well being and happiness as standalone goals in all development parameters.

So what is this happiness that the Bhutanese are so skilled at creating and what can we learn from it? Saamdu Chetri shares the wisdom of the system they have developed and use in Bhutan.

Happiness according to the Gross National Happiness (GNH) definition is serving others, living in harmony with nature and realizing human values and wisdom. Happiness is not those fleeting, momentary feel-good moods. The concept of GNH is to develop holistic human beings through the nine domains that we talk about often. We are able to balance the material and the spiritual well being of the people.

The mountain kingdom of Bhutan has an official policy of 'Gross National Happiness'.

How to Measure Happiness

Related Topic(s): Artificial Intelligence; Balance; Ideas; Intelligence; Intelligence Intelligent; Message; Purpose; Sharing, Add Tags
Add to My Group(s)
Go To Commenting
The views expressed herein are the sole responsibility of the author and do not necessarily reflect those of this website or its editors.