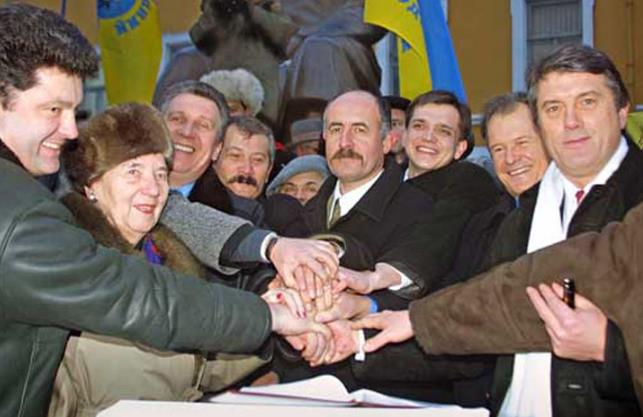 For the last 5 years, the world has gotten a glimpse of what Ukrainian nationalism is. "The Ukrainians" are never shy about claiming the right to murder their enemies. Since 2014, we've watched the entire government of Ukraine publically call for the murder of civilians in Donbass and Crimea as easily as the neo-nazi jackboots working for them murdered all those people in the May 2nd Odessa massacre of 2014.

Why are the US and EU supporting such a deviant political group? Why don't they demand Ukraine act like it belongs to the community of nations?

The questions are tough ones considering the billions of dollars the US alone pumped into post-Maidan Ukraine. For its part, "the Ukrainians" are doing exactly what they have done since the end of WWII. The post-Maidan (revolution of dignity- their term) Ukrainian nationalists have gladly taken every penny offered and like their WWII political progenitors, they promptly stole most of it.

In the spring of 2014, following Ukraine's coup of indecency, the first 3 billion dollars of US aid disappeared into a fund called Grandma's Cookie Recipes and was never seen again. This was about the time coup activist Arseny Yatzenyuk and Peter Poroshenko's wealth spiked. This level of corruption has been the norm for the last 5 years in Ukraine.

At the expense of the world, the Ukrainians have spent the last one hundred years trying to invent themselves.

The "Ukraine" was previously all the borderland between two competing empires. The Russian Empire to the east called their Ukrainian (means borderland) people "little Russians."

This included over 18 nationalities that Ukrainian Diaspora leaders and historians called ethnic "Ukrainian" for the first time in Canada during the 1930's through 1950s. Being Ukrainian was very much like being American in the sense it is not an ethnicity.

The 1930's prewar and wartime Ukrainians were a political movement that started in eastern Poland's Galician province and went to every extreme unsuccessfully trying to set up their own nationalist statelet under the supervision of Adolf Hitler's 3rd Reich.

Of consequence, during WWII, all of the "little Austrian " regional nationalities congealed under the leadership of the Nazi, Stepan Bandera's OUN. From that point, until they received their own states in the '80s through the '90s, they were under the direct oversight of Bandera OUN Nazis. Afterward, most of the established states like Latvia, Lithuania, and Estonia never left the fold. In the West, the OUN Ukrainian lobbies gained too much power to walk away from.

Following WWII, "the Ukrainians" set up governments in exile through their Diasporas with the help of western countries just as fast as the Cold War started. Until that point, the west including the US and Europe had no interest in Eastern European Nazis other than to try them for war crimes.

"The Ukrainians" gained notoriety during the Cold War as rabid anti-communists. During the war, the Ukrainians developed their own assassination and torture group called the SB OUN. This group gained the OUN worldwide influence because of their brutal terrorist methods. In postwar Spain, they were trainers for Franco's nationalists.

Most nationalist groups worldwide including Chinese, Korean, and Vietnamese nationalists joined the "Ukrainian" OUN(Organization of Ukrainian Nationalists) group called the ABN (Anti-Bolshevik Bloc of Nations). The Ukrainians tried ineffectively to get the US involved in the Chinese civil war. The Ukrainians vowed to never fail again.

The Ukrainians acted unsuccessfully for the benefit of their Chinese nationalist group leader Chiang Kai-shek in the late 1940s and 50's. Chiang Kai-shek's nationalists can literally be labeled as part of "the Ukrainians." This was known as the World Anti-Communist League (WACL) which was started by Yaroslav Stetsko.

Related Topic(s): Atrocities; Genocide; Hatred; Holocaust; Nationalism; Terrorism; Terrorism Sponsor List; Terrorism Terrorist Profiling; Terrorism Worsening Factors; Torture; (more...) Ukraine, Add Tags  (less...)
Add to My Group(s)
Go To Commenting
The views expressed herein are the sole responsibility of the author and do not necessarily reflect those of this website or its editors.