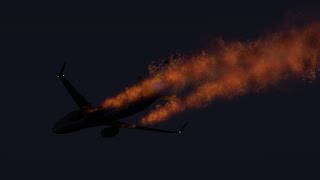 Who's to blame for downing Ukraine International Airlines Flight 752? Everyone's pointing the finger at Iran. Canadian Prime Minister Justin Trudeau says that it must take "full responsibility," Ukrainian President Volodymyr Zelensky is demanding an official apology, while even Iranian protesters are calling on Supreme Leader Ali Khameinei to resign.

"Regime change is in the air," ex-National Security Adviser John Bolton gleefully tweeted. "The people of Iran can see it." Because Iran fired the missile that killed 176 people, the government must pay the supreme penalty.

But how different things looked three decades ago when the USS Vincennes fired a medium-range surface-to-air missile at an Iranian airliner carrying 16 crew members and 274 passengers over the Strait of Hormuz. No one called on the United States to apologize, and no one demanded that the government be overthrown. To the contrary, there was barely a murmur when Ronald Reagan defended the downing as "a proper defensive action" while Admiral William J. Crowe Jr., chairman of the joint chiefs of staff, said that the ship had done nothing inappropriate.

"It is my judgment, based on the information that is available to us, that the commanding officer conducted himself with circumspection," Crowe said. He added that Vincennes Captain William C. Rogers "followed his authorities and acted with good judgment and at a very trying period and under very trying circumstances."

This was despite the fact that the airliner was over Iranian territorial waters, that its radio transmitter was "squawking" on a civilian frequency, and that it was ascending rather than swooping down low for an attack. Even though the admiral said that Rogers was blameless, he struck other navy men on the scene as so aggressive that they began referring to his high-tech ship as "RoboCruiser."

"Having watched the performance of the Vincennes for a month before the incident, my impression was clearly that an atmosphere of restraint was not her long suit," a nearby ship commander named David Carlson wrote a year after the incident. "Her actions appeared to be consistently aggressive and had become a topic of wardroom conversation. " The Vincennes was never under attack by Iranian aircraft."

But being a superpower means never having to say you're sorry. So even though the US expressed "deep regret" eight years later and agreed to pay $61.8 million in compensation after the case wound up before the World Court in the Hague, it refused to accept legal liability or issue a formal apology.

Compare that to Iranian President Hassan Rouhani's statement that Flight 752 was a "great tragedy and unforgivable mistake" or Islamic Revolutionary Guard commander Hossein Salami's emotional confession: "I swear to almighty God that I wished I was on that plane and had crashed with them and burned but had not witnessed this tragic incident."

At least Iran admits it was wrong whereas the US remains unrepentant.

This is not to let the Islamic republic off the hook. To the contrary, its immediate response to Flight 752 was obfuscation and prevarication in plain English, to put off facing the truth as long as possible. Within hours, a military spokesman dismissed as "ridiculous" reports that friendly fire was responsible, while the next day the state-run Islamic Republic News Agency blamed a Pentagon-run "psychological operation" for mounting claims that Iranian air defense was at fault. Only on Jan. 11, three days after the crash, did the Iranian military admit that the airliner appeared to have been heading for "a sensitive military site" and that an anti-aircraft operator had then launched a missile "due to human error " causing the martyrdom of a number of our compatriots and the deaths of several foreign nationals."

The timeline of events leading up to the tragedy is well known. On Jan. 3, Trump shocked the world by "droning" Iranian General Qassem Soleimani and nine others. The strike at Baghdad International Airport was not only a brutal assassination, but a flagrant violation of Iraqi sovereignty and all but an open declaration of war.

Americans were jittery as a result while Iranians were even more. After all, while the final outcome of a US-Iranian war is uncertain due to a multiplicity of political and military factors, there's little doubt that the damage to Iran would be immense. Moreover, it's already under siege thanks to Trump's abrogation of the 2015 Iranian nuclear accord and his May 2018 decision to impose "the highest level of economic sanctions." The Iranian economy is now contracting at a 9.5-percent annual rate as a consequence, roughly the same as the US rate of decline in 1931-33, while oil exports have virtually ceased. The embargo on pharmaceutical imports "has almost certainly contributed to documented shortages," Human Rights Watch reports, "ranging from a lack of critical drugs for epilepsy patients to limited chemotherapy medications for Iranians with cancer."

So Iran has a right to feel jumpy. Although its response to the Soleimani assassination was carefully calibrated so as to minimize casualties, it had no idea what would happen next. Days earlier, Trump tweeted that the US had "targeted 52 Iranian sites ... some at a very high level and important to Iran and the Iranian culture," targets that it promised to "HIT VERY FAST AND VERY HARD" if Iran dared lift a finger in response to Soleimani's death. So it was unknown if Trump would stand down after Iran's limited missile attack on two US Iraqi airbases or up the ante even more.

Related Topic(s): Blame; Confrontation; Flight 752; Iran, Add Tags
Add to My Group(s)
Go To Commenting
The views expressed herein are the sole responsibility of the author and do not necessarily reflect those of this website or its editors.